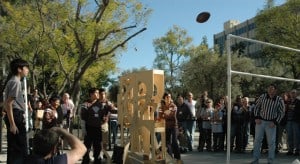 “Shockolate,” a team from Culver City High School, picked up top honors at the annual Invention Challenge, held December 9 at the Jet Propulsion Lab at the California Institute of Technology. The event drew more than 150 students and teachers representing 18 schools from throughout Southern California.This year’s challenge was to build a unique device that kicked a football of regulation size and weight over a barrier and into a trashcan. A total of 23 student teams competed side-by-side with seven JPL teams of engineers. Each team was allowed to have their device kick the football a maximum of three times within a one-minute interval. Points were awarded for getting close to or inside the trashcan. The winning team, “Shockolate” was the team whose device accumulated the most points.

The requirements this year: The devices had to be capable of kicking a football over a 16.4 feet- (2 meter-) high barrier located about 8 feet (2.5 meters). Kicking is defined as a striking or impacting motion that propels the football towards the trashcan. Pushing or slinging the football was not allowed. The field judge was tasked with deciding if the “kick” requirement was met for each kick attempted.

This year, the event featured an honorary judge. Jeff Locke, the UCLA football team’s punter, kicked a few footballs and even took a moment to address the crowd to emphasize the importance of education. The specific goal of the Invention Challenge changes every year, but it always stresses applied creativity and engineering skills.

Congratulations, too, to the members of the other CCHS team that participated in the competition : Jeffrey Asai, Steven Kakehashi, Imanuel Chen, Jaimal Ichharam, Manan Kothari and Jordan Miller.

Both teams designed and built their devices themselves and competed at Manual Arts High School in mid-November in order to qualify and advance to the finals at JPL.

Not only did the winning team beat 23 other student teams, but also seven teams of JPL engineers!