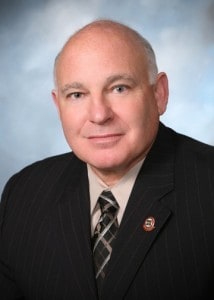 “I believe I have made a difference as a member of the City Council and with the support of the community I hope to be able to continue to serve Culver City.” Culver City Councilman, former Mayor and longtime Culver City resident Andrew Weissman is inviting the public to attend a campaign kickoff celebration to begin his re-election campaign for a seat on the Culver City Council in the April, 2012 election. The event will be held from 1 to 4 p.m. on Sunday, December 11 at the home of Michael Whitaker and Darren Au at 10760 Molony Road in Culver City. The event is free, and the public is invited to attend. Those who wish to attend are asked to please RSVP to (310) 839-5217 by December 8.
Weissman’s campaign combines deep roots in Culver City, decades of service to our community and a commitment to making our city even better. Weissman, who was ﬁrst elected to the City Council in 2008,
has also spent time on the city’s Planning, Civil Service, Human Services and Parks Commissions. He is a past-president of the Downtown Business Association and a member of the city’s Homelessness Ad Hoc Committee.
Over the past four years, Weissman said he is proud of the new attitude and sense of civility he has
brought to the Council.
“I have worked hard to fulﬁll the commitment I made four years ago to bring a different attitude to
our public meetings, one that is respectful to all points of view, one that seeks to bring people together
and achieve consensus on critical issues, by engaging in a decision making process that includes listening,
analyzing, questioning, balancing and, in the end, making choices in the best interests of Culver City,”
he said. “Despite the frustrations and challenges we face, I am proud of what my colleagues on the City
Council and I have been able to achieve these past four years.”

Prior to serving on the City Council, Weissman chaired the city’s Charter Review Committee as well as
the Yes on Measure V campaign. Measure V was overwhelmingly approved by voters in 2006 and resulted in
sweeping changes to the City Charter instituting ethics provisions for the ﬁ rst time, replacing the CAO form
of government and transitioning to a City Manager form, and in so doing, helping to streamline government.
He has also served as a member of the Bio-Ethics Committees at both Washington Medical Center and
Brotman Medical Center, past president of the Culver City Convention & Visitors Bureau, past chairman of
the board of managers at Culver-Palms Family YMCA, past chairman of the Fiesta La Ballona Committee
and board member of the Rotary Plaza senior citizen housing project.
“I’m proud of my track record of working hard for our city,” said Weissman. “Over the past four years, the City Council and I have tackled some very difﬁ cult issues and have always focused on making Culver City the best it can be. I am proud of my leadership role in the City’s successful legal battle to protect the health, welfare and safety of the community from urban oil drilling. We have been responsible in handling the ﬁ nancial crisis that has taken its toll on many other cities.”
“I will continue our effort to protect our quality of life and make sure that policy is not set by developers or single-issue advocates. We need to continue our efforts to protect our vital resources, promote environmental awareness, address our future needs and create new jobs to fuel our economy. The past four years have been challenging for everyone. We have made remarkable progress in not only managing a very trying ﬁ scal situation, but in putting the city on a more sound and more sustainable ﬁ nancial footing. I want to continue my efforts
to work together and create the consensus necessary to weather the economic storm and maintain a city that we are all proud to call ‘home.’”
Weissman has been honored by a number of organizations. In 2008, he was honored by the Friends of the Culver City Youth Health Center for 30 years of service to the Culver City community and its youth. He has earned the Community Architect Award from the 49th Assembly District, the Community Achievement Award from the Independent Order of Foresters, the Good Scout Award from the Boy Scouts of America and the Citizen of the Year Award from the Culver City Chamber of Commerce, which has also honored him with the
President’s Award twice.
He is a graduate of Culver City High School and earned his bachelor’s degree from California State University, Northridge and his law degree from Loyola University School of Law.
Weissman lives in Culver City with his wife, Doneil. They have ﬁve children: Adam, Lauren, Guy, Cory and Jamie; and four grandchildren: Luke, Jake, Cambria and Ava (and another boy on the way!)