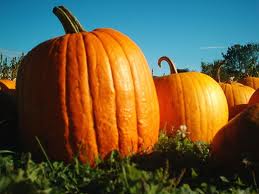 Pumpkins, pumpkins and more pumpkins. With fall in the air and Halloween just around the corner, pumpkins are on everyone’s shopping list this week.

If you’re in the mood for some Harry Potter inspired pumpkin juice, make sure to pick up a couple of the 1-3 lb size sugar pumpkins. Jack O’Lantern sized pumpkins are great for carving and mini pumpkins make cute decorations, but sugar pumpkins have the sweetest flesh and most pleasing texture. They are not as stringy as Jack O’Lantern pumpkins or as mealy and dry as the decorative ones. Cooked sugar pumpkin flesh is very much like pumpkin pie filling. No surprise, really, as they’re often called pie pumpkins.

As any fan of Harry Potter knows, pumpkins are not just for eating anymore. Even a Muggle can make pumpkin juice and healthy Halloween snacks to fortify trick-or-treaters before they leave on their quest for chocolate frogs, Berty Botts’ Every Flavour Jellybeans, chocolate, candy corn, eye ball jawbreakers, more chocolate, and, of course, chocolate.

Rosemerta’s Pumpkin Juice recipe has appeared on the websites Mugglenet.com and WizardingWorldPark. Last year, Fresh From the Farm published a similar recipe using a fresh sugar pumpkin — without the spices. This mildly spiced version brings out the best of both worlds: Wizarding Pumpkin Juice and Muggle Pumpkin Pie spices. This year’s healthy Halloween snack suggestions have been adopted from recipes posted at Family Fun magazine and Womans Day.

If you have a juicer, juice the pumpkin chunks following your juicer’s instructions. Otherwise, line a colander or sieve with cheesecloth. Put the pumpkin chunks in and press down hard with a large spoon or other implement. You’ll want to extract as much juice as you can. Reserve the remaining pulp for another use, or discard.

One small sugar pumpkin should yield 2 to 3 cups of juice. Strain it once again. Mix the pumpkin juice with the apple and pineapple juices. Add the spices, stir well. Taste. Add 1 T. honey if you think it needs a little more sweetness and additional spices if desired. Stir again. Chill. Serve iced.

This easy-to-make snack is a hit with young and old alike. I’m sure kids will have nearly as much fun making the apple bites as they will eating them.

Wash the apples. Cut them into quarters and cut out the core. To make the mouth, remove a wedge from the skin side of the apple. Make an angled shallow cut about a third of the way down from one edge and another angled shallow cut a third of the way from the other edge. Remove the wedge, and insert slivered almond “teeth” along the top and bottom of the “mouth.” Drizzle orange juice or sweet Meyer lemon juice over cut areas to prevent discoloration.

tomato slices, cut in half (optional; orange fleshed tomatoes would be great if you can find some)

Let your inner ghoul express itself as you get into the Halloween spirit assembling this layered bean dip. You’ll need a large platter or shallow bowl to start. Line it with lettuce leaves. Your first layer is refried beans. Spread a layer of salsa over the beans, and top that with guacamole. If you’re making this ahead of time, sprinkle some fresh lime juice over the guacamole to prevent discoloration. Use the sour cream to create a spider-web pattern on top of the dip. If you have a piping bag and tip, by all means use them. I don’t, so I fill a small zip lock bag with sour cream and snip off just a small bit of one edge.

Place the tomato slices around the outside of the “web.” Put black olive “spiders” on the tomatoes.

To make “spiders,” cut some of the extra-large pitted olives in half. Put a dab of sour cream on top of the tomato slices. Then place the olive halves, round side up, on top of the sour cream. Next, slice some olive halves into “legs,” and add “legs” to the spider “bodies.”

Serve at room temperature. If you make it ahead of time, cover it and keep it in the refrigerator until serving.

Katie Malich is still deciding what to wear on Halloween. She misses going around door to door with a bag for candy and a box for UNICEF. She’d love to make a donation to charity in honor of your trick-or-treaters. Please contact her c/o Culver City Crossroads with the names and costumes of your trick-or-treaters, or for more information about her childhood trick-or-treating tradition http://youth.unicefusa.org/