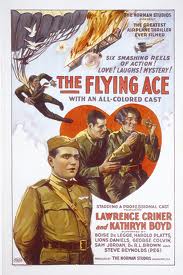 THE FLYING ACE is a 1926 film that was made with an all black cast by Norman Pictures, an independent black studio. The film stars Lawrence Criner as Capt. Billy Stokes, a fighter pilot who comes home from World War I and resumes his job as a railroad detective. The female lead in the film, Ruth Sawtelle, is played by Kathryn Boyd.

Join us this Saturday for this rare silent film with organ accompaniment by Cliff Retallick.

The DVD for this film was provided by the Norman Studios Silent Film Museum and more information on their organization can be found at www.normanstudios.org/

Join us this Saturday Oct. 22 or this rare silent film with organ accompaniment by Cliff Retallick.