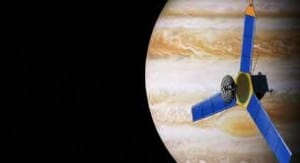 On its way out to Jupiter, the biggest planet in the Solar System, NASA’s Juno spacecraft took time to capture an image of its home planet and Earth’s natural satellite—our own Moon.

“This is a remarkable sight people get to see all too rarely,” said Scott Bolton, Juno principal investigator from the Southwest Research Institute in San Antonio. “This view of our planet shows how Earth looks from the outside, illustrating a special perspective of our role and place in the universe. We see a humbling yet beautiful view of ourselves.”

Juno covered the distance from Earth to the Moon (about 250,000 miles) in less than one day’s time. It will take the spacecraft another five years and 1 billion,740 million miles to complete the journey to Jupiter. The spacecraft will orbit Jupiter’s poles 33 times, using its eight science instruments to probe beneath the gas giant’s obscuring cloud cover to learn more about its origins, structure, atmosphere and magnetosphere, and look for a potential solid planetary core.

The solar-powered Juno spacecraft lifted off from Cape Canaveral Air Force Station in Florida on Aug. 5 to begin its five-year journey to Jupiter.

Meanwhile, much farther away and now orbiting our Solar System’s second-largest planet, NASA’s Cassini spacecraft captured new views of Saturn’s oddly shaped moon Hyperion during its encounter with this cratered body on Thursday, Aug. 25. Images were acquired as the spacecraft flew past that moon at a distance of about 15,500 miles, making this Cassini’s second closest encounter with Hyperion.

Hyperion (meaning “the high one” and named for one of the twelve Titan gods of ancient Greece) is a small moon, just 168 miles in diameter. It has an irregular shape and surface appearance, and it rotates chaotically as it tumbles along in orbit. This odd rotation prevented scientists from predicting exactly what terrain the spacecraft’s cameras would image during this flyby.

However, this flyby’s closeness has likely allowed Cassini’s cameras to map new territory. At the very least, it will help scientists improve color measurements of this moon. It will also help them determine how its brightness changes as lighting and viewing conditions change, which can provide insight into the texture of the surface. The color measurements provide additional information about different materials on Hyperion’s deeply pitted surface.

Cassini’s closest encounter with Hyperion was on Sept. 26, 2005, when the spacecraft flew approximately 310 miles above the moon’s surface. Cassini’s next flyby of Hyperion will be on Sept. 16, 2011, when it passes the tumbling moon at a distance of about 36,000 miles.