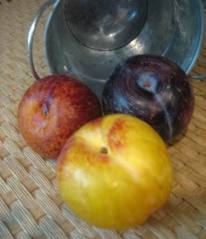 Cotton Candy. Crimson Glo. Dapple Fare. Dinosaur Egg. Geo Pride. Don’t all these conjure up colorful images?
Wait, there’s more. How about some flavor? There’s Flavor King, Flavor Queen, and Flavor Pride. Color, flavor … just exactly what is being named?
You may not recognize the names of all these varieties. But if you’re a regular Southern California farmers market shopper, I’m sure you’d have one of those “ah-ha” moments in front of our summer fruit stands.
Stone fruit. Hybrid crosses of plums and apricots. Pluots and plumcots. In late summer, the aprium (apricot and plum hybrid) season is over, but our growers still have plenty of late season pluots and plumcots, as well as the more familiar summer stone fruit: peaches, nectarines, and traditional plums.
The pluots and plumcots you find at the farmers market are not so-called “Frankefruits” – derived from genetically modified organisms (GMO). They are cultivars of fruit which have been developed through intentional cross-pollination, often by hand, over several generations.
In the late 1800’s and early 1900’s, famed American botanist and horticulturalist Luther Burbank invented eleven varieties of plumcots – crosses which were 50% plum and 50% apricot. His pioneering work also led to the popular Shasta Daisy; Santa Rosa plum; Elberta and freestone peaches; and Russet Burbank potato, the most widely cultivated potato cultivar in the United States.
Eighty-six year old Floyd Zaiger has taken interspecies cross-breeding to a new level. The Modesto, California grower now holds 280 patents and has trademarked the names Pluot and Aprium for the fruits (pun intended) of his “interspecifics” which are the results of Zaiger’s complex cross-breeding program. Zaiger develops a pluot by taking a plumcot with desirable characteristics and then breeding it back to the specific “parent” variety of plum. Apriums are plumcots crossed with their “parent” apricot. Often, several generations of intentional cross-breeding ensue before a new variety is ready for sale to growers. While Zaiger, Inc., Genetics is most noted for its continual development of pluot varieties, Zaiger has also developed many of the white-flesh and low acid peach and nectarine varieties which are now commercially available.
Zaiger is not the only horticulturalist currently working with apricot-plum hybrids. You’ll find that stone fruit crosses may be labeled and sold as pluots or plumcots.
When you’re shopping at the Culver City Farmers Markets, feel free to talk to the growers and staff at the stands. The seasons for some of the varieties are only a few weeks long, so if there’s a sample you particularly like, I recommend checking with the grower to see how much longer they anticipate having that variety at market. And if you don’t find the particular fruit you were looking for, try samples of currently available stone fruit. With all this diversity, there’s bound to be something you like.
True to their colorful and taste-tantalizing names, pluots are intensely flavored and beautifully colored, often with vivid contrasts between their smooth skin and juicy flesh. Look for fragrant fruit which gives slightly to gentle pressure to get pluots at the peak of ripeness. Make sure you take care bringing ripe pluots home; their tender skin is vulnerable to damage. And don’t worry if your pluots are still fairly firm. They will ripen at room temperature with or without a paper bag..
Pluots are excellent eaten out of hand, which is how I usually enjoy them. Some people will add them into a refreshing cool fruit smoothie. They can be substituted with ease for plums or apricots in your favorite cobbler, pie and tart recipes.
The Centers for Disease Control provide useful nutrition information, recipes and budget tips to help us eat our “5 A Day.” Apriums and pluots were recently the CDC’s Fruit of the Month. Here are two pluot recipes I’ve adopted from the CDC website. Both of them are easy to make – 15 minutes of prep time. Both the colorful pasta salad and the tasty fruit-kabobs make wonderful side dishes for an end-of-the-summer barbeque. There’s plenty of other useful information at the CDC website: www.fruitsandveggiesmatter.gov/benefits/index.html .
Confetti plum (pluot)-pasta salad
(6 servings)
8 ounces corkscrew pasta, cooked
1/2 medium red bell pepper, cut into strips
3/4 cup peeled and diced jicama
1/2 cup chopped red onion
8 pluots, sliced
2 T. fresh basil leaves, sliced lengthwise
1 t. finely grated fresh ginger
3 T. rice or white wine vinegar
1 T. vegetable oil
1/8 t. salt
1/8 t. freshly ground black pepper
Cook the pasta in salted boiling water according to package directions. To avoid the pasta becoming too soft once the salad ingredients are mixed together, I suggest cooking it until it is al dente, or just beyond al dente. Then immediately drain it and then rinse it in cold water. Set aside.
While the pasta is cooking, prepare the vegetables. If the bell pepper is long, cut it midway into two pieces before cutting it into strips. You want them to be about the same as a piece of the cooked pasta. Rinse and slice the pluots into wedges which are about the same thickness as the bell pepper strips. The wedges should be about the same thickness as the bell pepper strips.
Cook the pasta according to the package directions. Drain. Rinse briefly under cold water and drain. In a large bowl, toss together the pasta, red and yellow bell peppers, jicama, onion, and pluots.
In a small bowl, whisk together all the basil, ginger, vinegar, oil, salt, and pepper until blended. Drizzle the dressing over the salad and toss evenly until coated. Serve at room temperature or chilled.

Cut each half of fruit into thirds. Place fruit in medium bowl, add lemon juice and cayenne pepper; mix well. Marinate fruit for 1 hour. On a skewer, alternate fruit wedges; chill. Garnish with mint or cilantro sprigs, if desired.