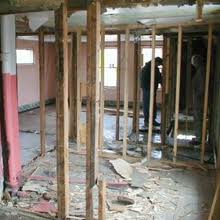 Can you believe it’s almost time to go back to school? I don’t know where the time has gone. When I was a child summer seemed to go on forever. They really were lazy, hazy days. Now summer seems to pass me by in the blink of an eye and I never get as much done as I feel I should.
Summer also seems to be the top time to tackle remodeling projects. However, according to Remodeling Magazine’s latest Cost Versus Value Report 2010-2011, remodeling may not have the same return on investment as it did a number of years ago. The cost-to-value ratio (how much a project cost vs. how much value it added to the home) has declined in recent years, and still slipped a further 3.8 points from 63.8% to 60.0% nationwide over the past year.
In the past, the ratio has been driven down by eroding home prices and rising construction costs. That pattern ended this year when overall construction costs declined 10.4%. However, rather than leading to a rebound in the cost-to-value ratio, the lower costs were overmatched by a 15.8% drop in estimated resale values nationwide.
Large remodels like adding square footage generally did not add as much cost-to-value return as did “replacement” projects, such as installing a new exterior door or replacing a garage door.
According to the report, “Replacement projects have always performed better in resale value than other types of remodeling projects, partly because they are among the least expensive projects in our report, and partly because they are non-discretionary improvements that contribute to curb appeal, which is a strong subjective factor among home buyers.”
Smaller high-end renovations, such as kitchen remodels, were important for resale in more affluent areas of the country. Larger remodels such as attic or basement renovations, or even new construction, also recouped over 100% of their cost in some areas of the Pacific and Southern regions. The report states that this phenomenon is certainly the exception to the rule and when it does occur it is usually tied to a particularly hot real estate market, or to specific projects that are in high demand. For many homeowners, particularly in areas where property values are stalled or dropping, it may seem impossible to recoup costs, even though improvements may be necessary to facilitate a sale.
Top 10 Small Jobs and Replacements
• Entry door replacement
• Garage door replacement
• Fiber-cement siding replacement
• Wood deck addition
• Minor kitchen remodel
• Attic bedroom remodel
• Basement remodel
• Window replacement
• Minor bathroom remodel
For more information about how remodeling can impact your home’s resale value, or for a contractor recommendation visit our website at www.heartrealtors.com or contact me directly by voice or text at 310-259-7419. You can also email me at email [email protected]