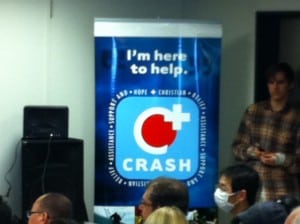 “When I turned on NHK  [Japan’s Public Television station] it was like watching a bad disaster movie, but it was real.” On the morning of March 11, as the earthquake and tsunami overtook Japan, Alan Oda was unexpectedly pulled in to work that he never imagined doing. “I was shoveling muck, I was taking pictures, I was traveling thousands of miles to places I never would have gone to, because I had to help.”
Oda is a very typical Culver City guy. He grew up here and lives in the house that his parents settled into when they first came. He has two sons, 10 and 7, who attend El Marino, in the Japanese program. Oda is a part of the group Japan Crash that is working on assisting the areas of Japan that were changed forever by the disasters of March. When he addressed the group of 30 or so YMCA members on August 3 who had gathered to hear about the recovery in Japan, Oda stressed the slogan that is everywhere in Japan, “Never give up. ”

Oda teaches psychology at Azusa Pacific University, and his experience with post traumatic disorder was put into great use in working with the survivors struggling to regain a sense of normalcy. “Think of New Orleans,” he reminded his listeners, “and know that this is a problem that will be with us for a long time to come.”

With another Japan Crash group scheduled to leave soon, Oda is looking for volunteers and contributions. Go to CrashJapan.com and find out what you can do.