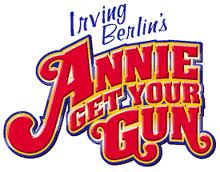 The story is a fictionalized version of famed American sharpshooter Annie Oakley her inspiring adventures with Buffalo Bill and his world-famous Wild West show. Set to the magnificent music of Irving Berlin, the show contains such classics as, “There’s No Business Like Show Business”, “Doin’ What Comes Naturally”, “You Can’t Get a Man With a Gun”, “They Say It’s Wonderful”, “My Defenses Are Down,” and “Anything You Can Do.”
The award-winning Children’s Civic Light Opera, (CCLO), has been recognized by several organizations such as L.A. Parent Magazine (Best Performing Arts Program / Best Enrichment Program 2009 & 2010) and National Youth Theater (Best Direction of a Musical, Best Actress, Best Actor, Best Set Design, Best Ensemble – with several nominations in various other categories.) The company is the brainchild of director/musical director Diane Feldman who founded the one-of-a-kind Educational Musical Theater program in 1987. CCLO embraces all abilities and experience levels, and the program has proudly graduated many professional performers: with three alumni now performing on Broadway.
When asked why her program is unique, Feldman states, “Our cast members don’t just “do” a show. They receive the most comprehensive theatrical training available to young people in this city, and they learn skills that can be applied both on stage and off. All programs are designed as intermediaries between educational theater and the professional world.” Feldman adds, “When integrated and applied productively, theater provides opportunity for social, emotional, artistic, academic and personal growth and development. Involvement in the Arts is one of the most effective resources for experiential and organic learning.”