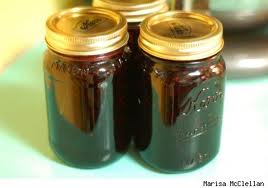 I’ve been jamming and pickling up a storm this past week. This weekend, Culver City’s Helms Bakery District is hosting the Eat Real Festival: two days of food fun complete with demonstrations, workshops, performances, contests, and more. You can learn how to make sauerkraut, show off your best baking skills, and chill out to some great music while noshing on affordable fare from your favorite food truck and sipping craft beers or aqua frescas. I’ve been putting up a very old pickle recipe and some modern jams for the competition.

Yeah, I know. Processing jars in a hot water bath in the middle of the summer. I drank iced coffee. And more iced coffee. Wary of any more iced coffee, I switched to the pitcher of iced herbal tea I’d made over the weekend. The blend of hibiscus, apple pieces, rose hips and elderberries was soothing, but a bit bland. I added a couple of slices of fresh ginger, which perked it right up.

I buy my ginger root from one of the Asian vendors at the Tuesday afternoon Culver City Farmers Market. You can also find fresh lemongrass there. I’m going to stock up on lemongrass today, so I can make up a big batch of lemongrass-ginger tea. You’ll find several stalks of lemongrass bundled together. Buying a small bundle of fresh lemongrass instead of the dried, packaged lemongrass tea means I can also enjoy its subtle, citrus flavor in soups, sauces and marinades. The white portion of the interior of the stalk near the root end is most commonly used in cooking. But you can use the green leaves to season steamed fish or roast chicken. You can also put them into soups and broths to add a subtle hint of lemon to the dish.

If you’re new to cooking with lemongrass, make sure your knife is sharp. The outer layers of the stem end and the green leaves are quite fibrous. Even if you remove the really tough outer leaves and just use the tender interior ones, you’ll need a sharp implement to work with.

Lemongrass tea is a relatively new addition to our cuisine, but it has long been enjoyed in the Philippines, throughout Asia, in Mexico and other Latin American countries, and even Africa. Africa? I wouldn’t have thought so, but Wikipedia’s entry informs us that lemongrass tea is enjoyed in Togo and the Democratic Republic of the Congo.

It’s easy to make Lemongrass-ginger tea at home. Here’s how:

ingredients:
1 quart of water
3 or 4 stalks of fresh lemongrass
1 – 2 inch piece of ginger root
(optional: sugar or honey or sweetener to taste)

Put the water in a covered pot on medium heat. Rinse the lemongrass. Cut off the root end of the stalk (at least one half inch, maybe more, from the end). Cut off the green portion. Reserve the green ends for other uses. Remove the tough outer leaves. To release the flavor from the stalk, bend it a couple of times to soften it. You can also place it on the cutting board and smash it with a tin can or with another blunt object. (Some people use the handle of a knife. Promise me you’ll be super-extra careful if you do that, OK?) Peel the ginger root. Slice it on the diagonal. Meanwhile, the water on the stove should be boiling. Add the lemongrass and ginger to the water, reduce heat and cover. Simmer for 5 minutes. Strain. Put into pitcher or tea pot. This may be served hot or cold. If I am making tea for iced drinks, I’ll make the tea a little stronger so that it will retain its flavor as the ice melts.

Don’t let the threat of Carmagedden keep you away from this weekend’s festival. It promises to be great!