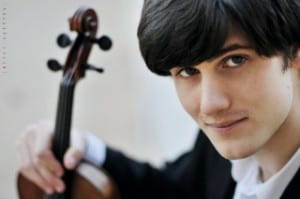 It was announced today (July 1)  that The Colburn School Conservatory of Music graduate Nigel Armstrong (class of 2011) was the highest placed American at the prestigious XIV International Tchaikovsky Competition. Armstrong was a featured soloist at the Culver City Symphony performance in June.

In what is the musical equivalent of the Olympics, Armstrong won the special prize and $3,000 for his performance of the commissioned work, John Corigliano‘s STOMP. Armstrong, who has studied at the Colburn School for four years, came in fourth position, taking the $7,250 prize. [No first prize was awarded in the violin division this year].

Nigel Armstrong said, “I’m truly honored and thankful to have made it into this level of the competition and thrilled to have been awarded the special prize for performance of  STOMP. I’d like to give a special thank you to my teacher, Robert Lipsett, and to all the faculty of the Colburn School for their inestimable dedication and guidance.”

Nigel earned his Bachelor of Music degree from the conservatory. He came to international attention with his silver-medal wins in the 2010 Menuhim Competition’s Senior Division and the First International Violin Competition of Buenos Aires. In both competitions he received additional prizes, including the “Premio Tango” in Buenos Aires. Since his solo debut with the Baroque Sinfonia, Mr. Armstrong has performed concerti and showpieces with the Boston Pops Orchestra, the Asociación de Profesores de la Orquesta Estable del Teatro Colón, the Norwegian Radio Orchestra, the Berkeley Symphony Orchestra, the Bozeman Symphony, the San Francisco Symphony Youth Orchestra, the Reno Philharmonic Orchestra, the Downey Symphony Orchestra, and the American Philharmonic of Sonoma County, with which he performed during two seasons.