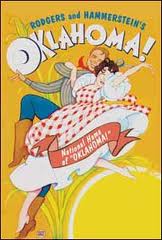 Westchester-based Music West, Inc. will delight audiences this summer with the timeless musical, Oklahoma! Considered by many to be the quintessential American musical since its debut more than 68 years ago, the beloved characters of Curly, Laurey, Will, Ado Annie and Aunt Eller, take us on a memorable musical journey through the settling of the United States’ western territory. Richard Rodgers and Oscar Hammerstein II’s first collaboration, Oklahoma! has given us many landmark musical numbers, including the theme song “Oklahoma”, “Oh What a Beautiful Morning”, “Kansas City” and “People Will Say We’re In Love”. Weaving the struggles of the “farmer and the cowman” as they settle a new land together with a touching love story, this is a definitely a show that has held constant appeal to people of all ages.

Starring several seasoned actors who are newcomers to the Westchester community, Oklahoma! will feature powerful performances by Matt Morris and Erika Brauer in the leading roles of Curly and Laurey, veteran actress Mary Michlovich as Aunt Eller, and supporting actors Sean Lask, Sam Harrison, RJ Davis, Sarah Loesby, Nick Dossman and Sarah Ann Head along with a talented ensemble cast. Directed and produced by Jeff and Laura Remington, the show will also see the return of professional live music by of Michael and Kathy Kramer, along with the MK Music orchestra.

Six performances will be offered at the Westchester Townhouse, centrally located at 8501 Emerson Avenue in Westchester. Shows will play Fridays, July 8 and 15, at 7:00 PM, and Saturdays, July 9 and 16, at 2:00 PM and 7:00 PM. Tickets are on sale now at www.musicwest.org starting at only $12.00 each (Visa/MC accepted with no additional fees). Seating is limited and sellouts are anticipated, so visit the website today or call 310-692-0006 for additional information on this production or to learn more about Music West, Inc., a family-friendly community theater organization.