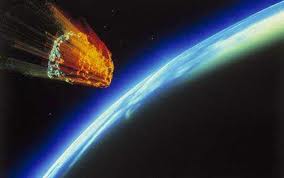 Since the dawn of the space age, humanity has sent 16 robotic emissaries to fly by some of the solar system’s most intriguing and nomadic occupants—comets and asteroids. The data and imagery collected on these deep-space missions of exploration have helped redefine our understanding of how Earth and our part of the galaxy came to be. But this fall, Mother Nature is giving scientists around the world a close-up view of one of her good-sized space rocks—no rocket required.

“On November 8, asteroid 2005 YU55 will fly past Earth and at its closest approach point will be about 201,700 miles away,” said Don Yeomans, manager of NASA’s Near-Earth Object Program Office at JPL. “This asteroid is about 1,300 feet wide—the largest space rock we have identified that will come this close until 2028.”

Despite the relative proximity and size, Yeomans said, “YU55 poses no threat of an Earth collision over, at the very least, the next 100 years. During its closest approach, its gravitational effect on the Earth will be so miniscule as to be immeasurable. It will not affect the tides or anything else.”

Then why all the hubbub for a space rock a little bit wider than an aircraft carrier? After all, scientists estimate that asteroids the size of YU55 come this close about every 25 years.

“While near-Earth objects of this size have flown within a lunar distance in the past, we did not have the foreknowledge and technology to take advantage of the opportunity,” said Barbara Wilson, a scientist at JPL. “When it flies past, it should be a great opportunity for science instruments on the ground to get a good look.”

2005 YU55 was discovered in December 2005 by Robert McMillan, head of the NASA-funded Spacewatch Program at the University of Arizona, Tucson. The space rock has been in astronomers’ crosshairs before. In April 2010, Mike Nolan and colleagues at the Arecibo Observatory in Puerto Rico generated some ghostly images of 2005 YU55 when the asteroid was about 1.5 million miles from Earth.

“The best resolution of the radar images was 25 feet per pixel,” said JPL radar astronomer Lance Benner. “When 2005 YU55 returns this fall, we intend to image it at 4-meter (15-foot) resolution with our recently upgraded equipment at the Deep Space Network at Goldstone, California. Plus, the asteroid will be seven times closer. We’re expecting some very detailed radar images.”

Radar astronomy employs the world’s most massive dish-shaped antennas. The antennas beam directed microwave signals at their celestial targets—which can be as close as our Moon and as far away as the moons of Saturn. These signals bounce off the target, and the resulting “echo” is collected and precisely collated to create radar images, which can be used to reconstruct detailed three-dimensional models of the object. This defines its rotation precisely and gives scientists a good idea of the object’s surface roughness.

“This is a C-type asteroid, and those are thought to be representative of the primordial materials from which our solar system was formed,” said Wilson. “This flyby will be an excellent opportunity to test how we study, document and quantify which asteroids would be most appropriate for a future human mission.”

Yeomans reiterated Wilson’s view that the upcoming pass of asteroid 2005 YU55 will be a positive event, which he describes as an “opportunity for scientific discovery.” Yeomans adds, “So stay tuned. This is going to be fun.”

You can contact Bob Eklund at [email protected], or visit his websites at www.bobeklund.com