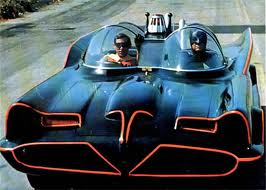 On Saturday, May 7th, Culver City is revving up again for the eighth annual George Barris “Cruisin’ Back to the Fifties” Culver City Car Show. Co-sponsored again this year by car customizer extraordinaire George Barris and the Exchange Club of Culver City, the show will exhibit seventy years of American roadsters, street rods and muscle cars. Barris is the creator of some of Hollywood’s most legendary cars from the Batmobile to the Munsters Koach and Beverly Hillbillies Jalopy. The 2011 edition of the show will start at 9 a.m. and features the crew from Car Warriors – Speed Channel’s latest primetime hit as the shows Grand Marshalls.

As it does every year, Culver City will close its downtown streets to host this family friendly event. Culver City rock heroes Stereo Union will lead off the live music segment of the show followed by old school rockers and fan favorites The Dynotones. Rockabilly icon Deke Dickerson will bring it home. Displaying their wares along with this cavalcade of classic cars will be dozens of themed vendors, along with an auction to support the Exchange Club’s children’s charities. Last year, more than 16,000 Southern Californians came out to see 500 custom classics and to sample hospitality Culver City style.

Trophies for this judged competition will be presented in several categories from Best El Camino and Coolest Convertible to Best Kustom Bike and everyone’s favorite The George Barris “Best of Show” trophy. Vehicle entry applications for car exhibitors are available on line at www.culvercitycarshow.com/ . Exhibitor applications will be accepted on the day of the show before 8 a.m. at the Culver City National Guard Armory located at 10808 Culver Blvd. Come early, show entries are limited. Plenty of public parking is available at city operated lots convenient to the event. No public parking for the car show will be permitted in the adjacent residential neighborhoods. For more information about the show call 310-499-4840.