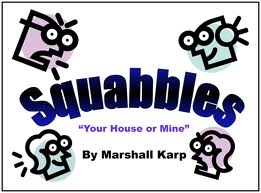 Kentwood Players announces auditions for the hilarious multi-generational family comedy “Squabbles” by Marshall Karp on Saturday, March 19 from 11:00 AM to 3:00 PM and Sunday, March 20 from 6:00 PM to 9:00 PM at the Westchester Playhouse, located at 8301 Hindry Avenue in Westchester (LA 90045). If needed, callbacks will be held on Monday, March 21. The production will be directed by Gail Bernardi, produced by Lori A. Marple-Pereslete and Calia Mintzer-Wolf by special arrangement with Samuel French, Inc. Performances will be from May 20 to June 25, 2011 on Fridays and Saturdays at 8pm and Sundays at 2pm at the Westchester Playhouse.

The play pits a father-in-law against a mother in a comedic succession of family squabbles. Jerry Sloan is a successful writer of advertising jingles and his wife is an equally successful lawyer. Living with the happy couple is Jerry’s wise-cracking curmudgeon of a father-in-law. The situation is exacerbated when Jerry’s mother loses her house in a fire and needs a place to stay. But Jerry’s mother and his father-in-law don’t like each other one bit, so how will they all survive in the same house? It’s a guaranteed laugh-a-minute situation with a heart-warming ending.

On July 2 the Kentwood Players 2010-2011 Marcom Masque Awards Dinner and Awards Ceremony was held at the Four Points by Sheraton Hotel in Culver City, organized by Shari Barrett and Linda Reinhardt, with Forbidden …[READ MORE]

Kentwood Players Get “Earnest” with Wilde

Kentwood Players continues its 60th Anniversary Season with Oscar Wilde’s immortal classic “The Importance of Being Earnest” from May 7 to June 12 on Fridays and Saturdays at 8 p.m. and Sundays at 2 p.m. …[READ MORE]