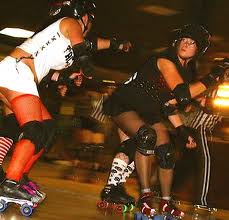 The Angel City Derby Girls, Los Angeles’ only flat track roller derby league, have announced their new home for the 2011 season will be in none other than the Heart of Screenland, Culver City, at the Veteran’s Memorial Auditorium on Sunday Jan. 30. Doors open at 4 p.m., and the action starts at 5, so bring your girls and get your seats.

Established in 2006, the Angel City Derby Girls (ACDG) skated at the Toyota Sports Center in El Segundo for 3 seasons, and have said that they think of West Los Angeles as their home.

“Culver City is an amazing community, and with more awareness of Roller Derby in the media than ever before, we feel like we will really make an impact,” says GoGo Gidget, training coach and long-time skater with Angel City.

With names like Chica Go Lightning, AlbaToss, Tyra Shanks, Reno Revolver and Hitney Fears, these women embrace the kitsch of the old-style of roller derby by paying homage to the legacy of skaters who often adopted pseudonyms or nicknames. Despite the witty names, these women are serious about the sport.

“I think there’s a misconception that roller derby is staged, like wrestling. But I assure you, when we step on the track, nothing is planned but the strategy, which rivals that of any sport. It has become a calculated, smart, full contact game,” says Duchess Von Damn, Captain of the All-Star team the Hollywood Scarlets. “Knowing that the speed and hits are real is exhilarating to watch,” she adds.

Modern roller derby has become more recognizable in the past few years, especially with the release of Drew Barrymore’s directorial debut film “Whip It” in combination with the rapid growth of roller derby leagues worldwide. There are currently over 600 roller derby leagues, predominantly played on a flat track, not the “banked” or sloped track that was iconic from the 1930s-1970s. The flat track has catapulted the game into a competitive international sport with rules and regulations outlined by the Women’s Flat Track Derby Association (WFTDA). The Angel City Derby Girls are proud members of the WFTDA and many of the games at Culver City will count towards their National Ranking and determine if they will compete at the Championships.

The Angel City Derby Girls are a group of women that have come together purely out of the love of the sport. The rest of the time they are everything from mothers to teachers, computer programmers, lawyers and designers. ACDG is a grassroots skater-owned and operated organization. Your support of their all-ages events brings a new and exciting option to Culver City’s nightlife that is both sport and entertainment all “rolled” into one.

The 2011 season debut will be on January 30th at the Veteran’s Memorial Auditorium at 4117 Overland Avenue.
For more information, visit www.angelcityderbygirls.com.

If you are a member (or would like to be one) of the Culver City Democratic Club, come  to the meeting this Wednesday evening, July 14, at 7 p.m. at the Veteran’s Memorial Building. Our …[READ MORE]

The second annual Great Culver City Scavenger Hunt will take place on Sunday, April 10th from 10 a.m. to 1 p.m. Registration is open to all and will take place at Veterans’ Memorial Park, 4117 …[READ MORE]