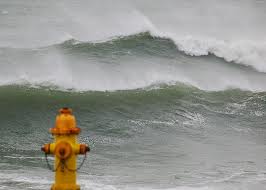 It’s not often that I wake up to breaking news (thank heaven)  but a broken water main has filled Woolford, parts of Orville  and McDonald streets with almost two feet of water. Reports of other flooded streets are coming in now, and photos will be posted this morning.

Sometime around 4 a.m., the residents who noticed the street flooding began knocking on doors to get cars off the road and out of the water. Only two vehicles were unclaimed by 5 a.m., and they were subsequently towed by the city to get them out of the flooded area. Dan Nannini of McDonald St. alerted a number of neighbors, and made sure that both the fire department and the water company were aware of the situation.

At 7:25, Joe Zimmerman of the Culver City Fire Dept. said they were waiting for the water company to turn off the water, and that it would then start to recede. “But it’s not like electricity where you can just splice a wire and get it going again. You may be without running water for a while.”

At 8:15, Albert Guiterrez of the Golden State Water assured residents that the main had been shut off, and that the water would be receding shortly. How long this section of Sunkist Park will be without running water is unforeseeable.

As of 9:40 this morning, the water was draining quickly, and parts of the street were again visible. Guiterrez said that they were in the process of repairing the break, and that the neighborhood would have running water again soon, possibly before the end of the day. When asked what caused the break, the answer was simple. “Age.”

Check back for photos, and stay posted for updates.