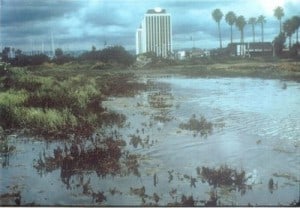 A major sewage spill that has closed a two-mile stretch of beach near Marina del Rey released about 500,000 gallons of raw sewage into a storm drain that runs to Ballona Creek into the ocean.According to the Los Angeles Times, the spill ranks among the worst in the last two years along the Los Angeles County coastline. The beach will probably remain closed for a minimum of three days.

What was the cause of this epic sewage spill, tainting the creek and closing the beach? Based on information provided by the City of LA to Culver City, debris consisting of (but not limited to) rags and a mop head, was lodged in the City of LA trap located in the trap maintenance manhole.

The spill originated from a City of LA manhole and flowed down the adjacent City of LA unimproved hillside.  A substantial portion of the spill infiltrated into the unimproved hillside, eroding the hillside before entering into a storm drain opening located in the City of LA approximately 600 feet from the manhole.  Beaches were closed by the Los Angeles County Department of Public Health as a precautionary measure.  Culver City Public Works Department contacted the California Emergency Management Agency (CalEMA) to verify that the City of LA had provided sufficient notification of the spill.
CalEMA verified receiving notification and confirmed that all applicable regulatory agencies were also notified.  The CalEMA control number for the spill is 10-5872.

At its December and January board meetings, Ballona Creek Renaissance (BCR), a Culver City-based nonprofit organization, elected officers and continuing and new Board and Advisory Council Members. Jim Lamm and Gerald Sallus were re-elected as …[READ MORE]