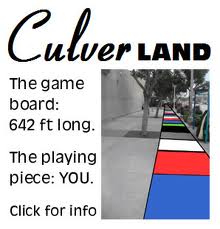 On September 30, John Derevlany’s Culverland will be installed on the south side of Culver Blvd, on the sidewalk just east of the historic Culver Hotel. This public art/game installation was commissioned through a request for proposal process by the Culver City Cultural Affairs Commission, approved by the City Council, and paid for by the City’s Art Fund. The installation will occur in conjunction with the 2010 IndieCade Festival: International Festival of Independent Games in Culver City, which begins on October 8th.

Culverland is a temporary artwork inspired by the work of early 20th Century Dutch painter Piet Mondrian. It is also a giant board game, accessible to the general public, inspired by a popular Milton Bradley game entitled Candyland.

The Culverland game board is 90 feet long by 18 feet wide and players become the game pieces as they move forward on the board based on the colors of cars passing through downtown Culver City. The rules of the game will be included on the board at its location in the sidewalk and are also available at http://www.culverland.com/rules.htm. The game is open to the public and players are invited to play through November 1, 2010 when the game will be removed.

The 2010 IndieCade Festival is the only stand-alone international festival of independent games open to the public in the United States and will include hands-on, playable exhibits of the 32 juried game finalists at locations throughout downtown Culver City. Produced by Creative Media Collaborative, Inc. and sponsored by the Culver City Redevelopment Agency and City of Culver City, IndieCade will take place October 8 -10, 2010 and deliver a full weekend of events, workshops, featured previews of anticipated new innovative works, an awards reception featuring the top awardees, salons and various workshops led

by industry leaders and featured gamemakers. Free events include access to the weekend Gamewalk, outdoor family games and other activities, as well as ongoing and city-wide game play. Tickets for festival passes, the gamemaker conference, and the red carpet awards ceremony may be purchased at http://www.indiecade.com/index.php/2010/tickets/.

Artist John Derevlany is a TV writer, animator, game designer, and transmedia producer who lives in Culver City, CA, with his wife and their two children. Mr. Derevlany is developing a series of real world and electronic games that are driven by environmental game mechanics (such as traffic, weather, insects, pedestrian behavior, etc.). Culverland is the first of these games to be produced.

The Great Culver City Scavenger Hunt is Coming Up

Where in Culver City can you…See a piece of the Berlin wall? Fly a kite with a view from Malibu to downtown L.A.? Find a diner in an alley? See rivers next to a creek? …[READ MORE]

As the light came up on the morning, I found myself still savoring the last of the darkness. My favorite view of downtown Culver City in the evening chill this past December is a postcard …[READ MORE]

Culver City is famous for the summer block parties. Many neighborhoods have them on Memorial Day or the Fourth of July. Now, the Downtown District has opted to have one every third Wednesday of the …[READ MORE]