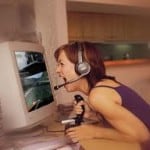 The dates are on the calendar, the venues are plugged in, and now IndieCade has the finalists. The International Festival of Independent Games announced the finalist games for its 2010 festival taking place October 8 through 10 in Culver City. IndieCade 2010 will present a phenomenal lineup of 32 diverse and innovative games selected by 160 international jurors from over 350 submissions. The games will be presented throughout the 3-day run of the festival that is open to the public, with an Awards ceremony scheduled for Friday evening, October 8 at 8:00 p.m. at Sony Studios that will be hosted by artist and storyteller LeVar Burton.

“Indie developers continue to expand their range and depth, from offering casual games featuring sock puppets to fresh experiences where you voyage through the stars as a comet,” said Stephanie Barish of IndieCade. “The spirit of independent game creation burns brightly this year, and we are thrilled to be able to bring these games to professionals interested in cutting-edge digital media, game developers, artists, publishers, and enthusiasts of all ages.”

In a twist unique to IndieCade, all finalist games in the festival are eligible for all award categories, which include: Jury Award, Aesthetics, Fun/Compelling, Gameplay Innovation (presented by BBC Worldwide), Technical Innovation, World/Story, Vanguard (presented by G4tv.com), Sublime Experience, Wildcard, Documentary, and Sound. Also presented will be the  IndieCade 2010 Honorary Trailblazer Award for Lifetime Achievement.

Among the games selected as finalists are;

1066 – The game (Preloaded / Channel 4, United Kingdom): A historical game commissioned by Channel 4 (UK) to accompany its two part documentary series on the War of 1066 and the battle for Middle Earth. A simple, fun strategy game that leverages causal gameplay elements and beautiful design while providing its audience with interesting information and knowledge about the War of 1066. 1066 – The game was created by Preloaded, the developers behind Super Me and other social change game projects. http://1066game.com

A Slow Year (Ian Bogost, USA): A Slow Year is a collection of four game “poems” for the Atari Video Computer System, one for each season, about the experience of observation and awareness. A Slow Year stakes out a deep and interesting design problem, searching for engaging and meaningful interactivity outside the traditional reaches of modern gameplay and typical genre design. Ian Bogot is a professor at Georgia Tech, and co-founder of Persuasive Games, creator of Airport Insecurity and a series of news games for the New York Times. Ian is also co-creator of IndieCade featured Cruel2BKind. A Slow Year was featured in the 2010’s Independent Game Festival (IGF) at the Game Developers Conference. http://www.bogost.com/games/game_poems.shtml

Auditorium (Cipher Prime, USA): Auditorium is an audio puzzle game where you convert light into sound, creating an explosion of orchestral music. Its addictively simple mechanic consists of manipulating icons to deflect light into a target on each level to generate bursts of music. The game has a flexible design, allowing for a range of solutions to each puzzle. Available for PC and Mac, and now iPhone, Auditorium was created by Philadelphia-based Cipher Prime. http://www.playAuditorium.com

B.U.T.T.O.N. (Brutally Unfair Tactics Totally OK Now) (Copenhagen Game Collective, Denmark): B.U.T.T.O.N. is a four-player, one-button party game played with Xbox controllers on the PC. The game has a WarioWare style mechanic consisting of short mini games in which players must stand back and rush the controllers to press the “right” button, although which button that is not always clear! Created by Copenhagen Game Collective, winner of the Most Fun Game at IndieCade 2008, B.U.T.T.O.N. was a hit at Gamma IV and at IndieCade’s E3 Showcase.  http://www.copenhagengamecollective.org/b-u-t-t-o-n/

Cargo Delivery (Cat in the Sky, Brazil): Cargo Delivery is a skill-based puzzle game revolving around the adventures of Rufus. To achieve his goal of having a nice sailboat to call home, Rufus must sail a freighter with loads of cargo. The churning seas, which cause cargo to topple overboard, and numerous obstacles along the way, must be overcome for Rufus to earn enough money to realize his dream. The delightfully quirky graphics combine well with the cartoon physics, and make this an adventure worth taking. Created by Santo Andre, Brazil based Cat in the Sky. http://www.cargodeliverygame.com/

Castle Vox (Sillysoft, Canada): Castle Vox is a new turn-based strategy game from SillySoft, developers of Lux and American History Lux. Castle Vox brings the engaging multiplayer social play and strategy of Diplomacy and Axis and Allies to the digital realm of turn based strategy. A fully realized digital board game, Castle Vox takes advantage of the computer medium to ease and finesse many of the mechanics of classic social strategy board games, and wraps them into a well designed, approachable and entertaining package. http://sillysoft.net/vox/

Continuity (Ragtime Games, Sweden): A well-designed and mechanically clever mashup of a simple platformer with classic sliding puzzle gameplay. Continuity has a strong aesthetic design, and simple, refined, and well-balanced gameplay. Top notch attention to design details such as audio allow the simple pleasures of the mechanic to be presented at the forefront of the IGF-winning, addictive and entertaining game developed by Elias Holmlid, Dmitri Kurteanu, Guy Lima Jr., and Stefan Mikaelsson, aka Ragtime Games, a student team at Chalmers University of Technology, Gothenburg. http://www.continuitygame.com/

For a complete list of all 32 finalists, go to Animation World News online. Get ready for October, when IndieCade will be live downtown.

Hey remember that time you were tricked into smuggling drugs by your Hasidic neighbor? That sucked. Inspired by actual events in the late nineties Holy Rollers tells the story of Hasidic Jews recruited as mules …[READ MORE]