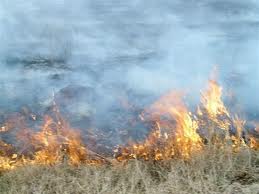 A sudden brush fire in the Culver Crest area this afternoon (August 20) at 3:30 p.m. burned about an acre in the area behind Marycrest Manor, but was quickly doused by units responding from the Culver City, and County of Los Angeles fire departments. According to fire department dispatcher Jason Bradford, there were no injuries, no structures were damaged, and the blaze was contained in less than 30 minutes.
The cause of the fire is still under investigation. Chief Chris Syverson, the officer in charge of the scene along with Captain Kieran Grayer, said that he was pleased with the response. “The good thing about a fire like this,” he said “is that now you have created another fire break. The line that has been created between the structures and the residual brush is another open space we can use for prevention.”

The first report of the fire included the reference of “structures threatened” which was was prompted the call to L.A. County for back-up. The area behind the tennis courts at Marycrest Manor is now a charred reminder to clear wild brush.

For more information about keeping your home or business safe contact the Culver City Fire Department at 310-839- 1146.