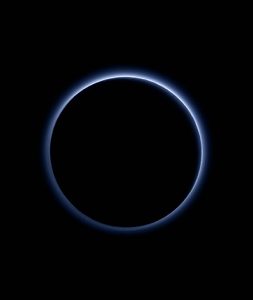 The gas composition of a planet’s atmosphere generally determines how much heat gets trapped in the atmosphere. For the dwarf planet Pluto, however, the predicted temperature based on the composition of its atmosphere was much higher than actual measurements taken by NASA’s New Horizons spacecraft in 2015.

“It’s been a mystery since we first got the temperature data from New Horizons,” said first author Xi Zhang, assistant professor of Earth and planetary sciences at UC Santa Cruz. “Pluto is the first planetary body we know of where the atmospheric energy budget is dominated by solid-phase haze particles instead of by gases.”

The cooling mechanism involves the absorption of heat by the haze particles, which then emit infrared radiation, cooling the atmosphere by radiating energy into space. The result is an atmospheric temperature of about 70 Kelvin (minus 203 degrees Celsius, or minus 333 degrees Fahrenheit), instead of the predicted 100 Kelvin (minus 173 Celsius, or minus 280 degrees Fahrenheit).

According to Zhang, the excess infrared radiation from haze particles in Pluto’s atmosphere should be detectable by the James Webb Space Telescope, allowing confirmation of his team’s hypothesis after the telescope’s planned launch in 2019.

Extensive layers of atmospheric haze can be seen in images of Pluto taken by New Horizons. The haze results from chemical reactions in the upper atmosphere, where ultraviolet radiation from the Sun ionizes nitrogen and methane, which react to form tiny hydrocarbon particles tens of nanometers in diameter. As these tiny particles sink down through the atmosphere, they stick together to form aggregates that grow larger as they descend, eventually settling onto the surface.

“We believe these hydrocarbon particles are related to the reddish and brownish stuff seen in images of Pluto’s surface,” Zhang said.

The researchers are interested in studying the effects of haze particles on the atmospheric energy balance of other planetary bodies, such as Neptune’s moon Triton and Saturn’s moon Titan. Their findings may also be relevant to investigations of exoplanets with hazy atmospheres.

New Horizons passed within 7,800 miles of Pluto, with this closest approach on July 14, 2015. New Horizons had a relative velocity of 30,800 mph at its closest approach, and came as close as 17,900 miles to Charon. Starting 3.2 days before the closest approach, long-range imaging included the mapping of Pluto and Charon to 25 miles resolution. Because of Pluto’s tilt, portions of the northern hemisphere were in shadow at all times.

Meanwhile, instruments on board New Horizons studied the atmosphere, both by emissions of atmospheric molecules (airglow), and by dimming of background stars as they pass behind Pluto (occultation). During and after closest approach, other instruments sampled the planet’s high atmosphere and its effects on the solar wind. They also searched for dust. A communications dish on Earth measured the disappearance and reappearance of the radio signal as the probe flew by behind Pluto. The results resolved Pluto’s diameter (by their timing) and atmospheric density and composition (by their weakening and strengthening pattern).