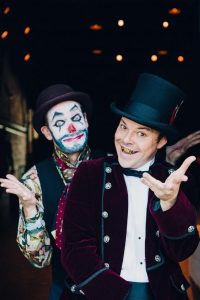 “My original concept for Captain Greedy’s Carnival was based on the idea that a carnival sideshow was a perfect allegory for our model financial system, as both are engineered to entertain, deceive and fleece an eager and gullible public. I decided to create a mock tribute to capitalism by presenting a sideshow impresario, Captain Greedy, as an aggressively unashamed perpetrator of gleeful exploitation,” said playwright Jack Pinter.

The musical satire follows the story of four innocents who, blinded by the promise of instant riches, take the bait of a legendary con man. Their fortunes rise and fall as they experience a bevy of freaks, illusions, terrifying exhibitions, strange amusements and games of skill and chance at Captain Greedy’s Carnival.

“Jack’s idea for Captain Greedy’s Carnival came during the crash of 2008 when it became terribly apparent that people who had trusted others had, essentially, been robbed, that muggers no longer had to wear balaclavas, carry weapons or stalk the night but could steal millions without leaving their offices….and it was in response to this that Captain Greedy was born,” said composer Roger Eno.‘

“Roger Eno and I knocked our heads together to write a series of songs designed to be attached to classic sideshow acts—freaks, wonders, conjurers, illusions, rides, games of chance—that could be used to recount the extraordinary events leading up to, during and after the 2008 financial crisis. We set the songs in the styles of the 1930s—the heyday of carnival sideshows and of the Great Depression. I wrote the script to weave these songs together with the narrative of one ordinary family that gets drawn into the carnival, and to illustrate the mechanics and grand purpose of capitalism as it is currently practiced in our global carnival.” Pinter continued.

“Our ‘Carnival’ celebrates that wicked paradox in irony and song-hooray for the winners ‘Well done chaps! Have a bottle on us (no,make it a case!).’Jack and I felt, I suppose, as impotent as the most people. What could we do but use our respective crafts to illustrate the situation?” composer Roger Eno said.

“Workshopping this show with The Actor’s Gang has been a fabulous way to clarify the narrative, hone the characters and realize this concept in true sideshow fashion—working with a company of versatile performers, designers, makers and innovators who are dedicated to doing everything in their power to bring an entertaining and provocative show to life,” said director Will Thomas McFaddden.

Captain Greedy’s Carnival begins previews Thursday, September 21st, opens Saturday, September 30 and runs through November 11, 2017, at The Actors’ Gang Theater, in Culver City.
Since 1981, The Actors’ Gang has created and presented over 150 bold, original works and reinterpretations of the classics that address the human condition from an uncompromising and fresh perspective. Over the past 35 years, The Actors’ Gang has performed for audiences throughout the world, on five continents and in 40 U.S. States.

Our groundbreaking Prison Project is currently in ten California prisons serving incarcerated women, men and children with rehabilitation programs that reduce tensions in prisons and significantly reduce the recidivism rate.

Hundreds of children in Los Angeles public schools discover confidence and creativity with our Education Department through in school immersion and after school programs. Our classes encourage acceptance, respect and team building in a fun and effective way. For more information, please visit us in our theater or online at www.theactorsgang.com.

General tickets are available for $34,99. Seniors and students may purchase $30.00 tickets. Thursday evenings are “Pay-What-You-Can.” For tickets, please call 310-838-4264 or visit www.theactorsgang.com to purchase tickets online or to view the complete Season of Thugs, Outcasts and Heavenly Myths schedule. The Actors’ Gang Theatre is located at 9070 Venice Blvd, Culver City, CA, 90232.