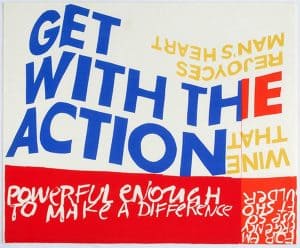 A gallery of internationally recognized art has been donated to West Los Angeles College and the doors will be open for the community to come and enjoy a free reception and exhibition on September 21 at 5 pm.  Showcasing the college’s new permanent collection featuring works by artists recognized nationally and internationally. The collection was generously donated by Dr. Ernest Nagamatsu, philanthropist and retired dentist turned race car enthusiast, and his wife Elaine Nagamatsu.

Pieces to be showcased include photographs, ceramics, paintings, and serigraphs from Ed Ruscha, Elsa Rady, Mike Saijo, Sister Mary Corita Kent , Mike Kanemitsu and others. “Several of the pieces are considered modern masterpieces,” said exhibit curator Molly Barnes, long-time art dealer, curator and radio personality. “These artists have exhibited around the country and around the world,” she added.

ED RUSCHA is associated with the pop art movement and has exhibited in well-known venues throughout the world. Gagosian, an international collection of galleries, described Ed Ruscha’s paintings, drawings and artist books as recording the shifting emblems of American life in the last half century. “His deadpan representations of Hollywood logos, stylized gas stations, and archetypal landscapes distil the imagery of popular culture into a language of cinematic and typographical codes that are as accessible as they are profound.”

ELSA RADY’S ceramics are in the collections of the Smithsonian American Art Museum, the Metropolitan Museum of Art, the Los Angeles County Museum of Art and the Cooper Hewitt. Rady was a Culver City resident before her death. The arts were in her blood as her mother was a dancer for Martha Graham and her father was a record executive producer.

Mixed media artist MIKE SAIJO, who is scheduled to attend the opening, is a Los Angeles based artist who creates his post-modern conceptual paintings by photocopying images of historical figures onto old worn pages in an attempt to correlate text and history. Saijo’s work has been featured in the MOCA (Museum of Contemporary Art), the USC IGM Art Gallery, and the Ramajangala University of Technology .

SISTER MARY CORITA KENT was an artist, educator, and advocate for social justice. Her work evolved from figurative and religious to incorporating advertising images and slogans, popular song lyrics, biblical verses, and literature. She left her order after turning 30 and her work evolved into a sparser, introspective style, influenced by living in a new environment, a secular life, and her battles with cancer.

MATSUMI KANEMITSU is considered a second-generation abstract expressionist. He is best known for his non-objective paintings which are often hard-edge. As a child, he was arrested and interned after the attack on Pearl Harbor. While interned, he began drawing with supplies provided by the American Red Cross. His formal art education was with Fernand Léger in Paris and with Yasuo Kuniyoshi at the Art Students League of New York. He later became the teacher for Chouinard Art Institute and the Otis College of Art and Design.

DONOR DR. NAGAMATSU has a warm regard for community colleges as he began his college journey at East Los Angeles College before transferring to the University of Southern California to earn a dentistry degree. His large art collection began by trading dental services for art. The Nagamatsus have also donated pieces to the Sweeney Art Gallery at the University of California, Riverside.
“We are honored to have been selected for this generous donation and look forward to sharing it with both our campus and greater community throughout the coming years,” said Dr. James M. Limbaugh, WLAC President.

The exhibit (which will run through October 31) and reception begin at 5:00 p.m. in the Fine Arts Gallery. Refreshments will be served. The best parking is in the adjacent parking structure for $2.00. Exact change needed.