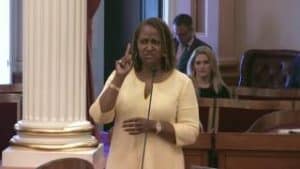 Lawmakers approved and sent to the governor an #EquityAndJustice bill to reform California’s criminal justice system to help children and young adults thrive.

Today’s action follows the Legislature’s approval last week of SB 190, which would end unreasonable fees on the families of incarcerated children and also awaits the governor’s signature.

The governor has until mid-October to sign, veto or allow the measures to become law without his signature.

In May, Brown signed the first of the #EquityAndJustice bills, SB 355, which will, on Jan. 1, 2018, end the requirement that innocent defendants reimburse the counties for the cost of appointed counsel. Instead, only those who are convicted will be charged.

“People are realizing that it is time to reform the criminal justice system so that there’s more emphasis on justice and rehabilitation,” Mitchell said after the final vote on SB 180, which is supported by nearly 200 business, community, legal and public-service groups. “By repealing sentencing enhancements for people who have already served their time, California can instead make greater investments in our communities.

“Let’s focus on putting ‘justice’ in our criminal-justice system.”

Mitchell, of Los Angeles, and Lara, of Bell Gardens, unveiled their #EquityAndJustice package during a press conference on March 20. Details and video HERE.

“The policy of sentencing people with nonviolent drug offenses to long periods of incarceration has proven an expensive failure,” said Eunisses Hernandez, Policy Coordinator for the Drug Policy Alliance. “Sentence enhancements for prior drug convictions have not in any way reduced availability of drugs nor has it made our communities any safer. Repealing this war on drugs tool will free funds that can be reinvested in community programs that improve the quality of life and reduce crime.”

Ivette Alé, statewide coordinator for Californians United for a Responsible Budget, agreed.
“We celebrate the restorative impact (SB 180) will have on our communities,” Alé said. “These enhancements have resulted in sentencing thousands of people — mainly young men and women of color — to long periods of incarceration in brutal state prisons and county jails, destabilizing families and communities.”

The remaining bills in the package: