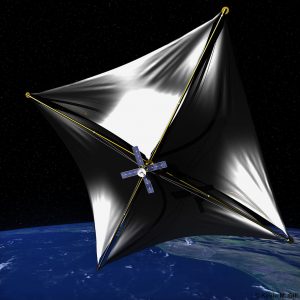 On June 23, a number of prototype “Sprites”—the world’s smallest fully functional space probes, built on a single circuit board—achieved low Earth orbit, piggybacking on OHB System AG’s ‘Max Valier’ and ‘Venta’ satellites. The 3.5-by-3.5-centimeter chips weigh just four grams but contain solar panels, computers, sensors, and radios. These vehicles are the next step of a revolution in spacecraft miniaturization that can contribute to the development of centimeter- and gram-scale “StarChips” envisioned by the Breakthrough Starshot project.

The Sprite is the brainchild of Breakthrough Starshot’s Zac Manchester, whose 2011 Kickstarter campaign, “KickSat,” raised the first funds to develop the concept. The Sprites were constructed by researchers at Cornell University and transported into space as secondary payloads by the Max Valier and Venta satellites, the latter built by the Bremen-based OHB System AG, whose generous assistance made the mission possible.

The Sprites remain attached to the satellites. Communications received from the mission show the Sprite system performing as designed. The spacecraft are in radio communication with ground stations in California and New York, as well as with amateur radio enthusiasts around the world. This mission is designed to test how well the Sprites’ electronics perform in orbit, and demonstrates their novel radio communication architecture.

Breakthrough Initiatives—including most notably, Breakthrough Starshot and Breakthrough Listen—are a set of long-term astronomical programs exploring the universe, seeking scientific evidence of life beyond Earth, and encouraging public debate from a planetary perspective.

Breakthrough Starshot, announced on April 12, 2016, by Yuri Milner and Stephen Hawking, is a $100 million research and engineering program aiming to demonstrate proof of concept for light-propelled spacecraft that could fly at 20 percent of light speed and, in just over 20 years after their launch, capture images and other measurements of the exoplanet Proxima b and other planets in our nearest star system, Alpha Centauri.

The Starshot concept envisions launching a “mothership” carrying about a thousand tiny spacecraft (on the scale of centimeters) to a high-altitude orbit and then deploying them. A phased array of ground-based lasers would then focus a light beam on the crafts’ solar sails to accelerate them one by one to the target speed within 10 minutes, with an average acceleration on the order of 100 km/s2, and an illumination energy on the order of 1 TJ delivered to each sail, estimated to have a surface area of 4 m × 4 m.

If an Earth-size planet is orbiting within the Alpha Centauri system habitable zones, Breakthrough Starshot will try to aim its spacecraft within 1 astronomical unit (93 million miles) of it. From this distance, a craft’s cameras could potentially capture an image of high enough quality to resolve surface features.

The fleet would have about 1000 spacecraft, and each one would be a very small centimeter-sized vehicle weighing a few grams. They would be propelled by a square-kilometer array of 10 kW ground-based lasers with a combined output of up to 100 GW. Each spacecraft would transmit data back to Earth using a compact on-board laser communications system using its solar sail as an antenna and the propulsion array as the receiver.