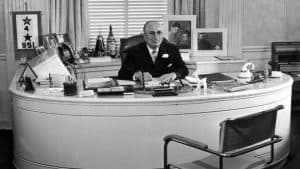 Culver City is turning 100! That’s right! And “The Heart of Screenland” is celebrating the event in style. Culver City has been celebrating its centennial since last September, as we countdown to the closing ceremonies and ceremonial bash on September 20th, the date of incorporation by Harry Culver one-hundred years ago. As part of the celebration, and a lasting commemorative of the 100th, is a time capsule which will be interned during the closing events.

As part of the Centennial Time Capsule Committee events, Alicia Mayer, great-grandniece of Louis B. Mayer, and the keeper of the MGM and Mayer flames and legacies, is donating some MGM memorabilia and photos to include in the time capsule. The items will be announced and on display to the public on August 6th at the Veteran’s Auditorium in Culver City. But beyond that, Alicia is going to give a special Q&A presentation on August 6th at 2pm in the Rotunda Room of the Veteran’s Auditorium in Culver City complete with photos, slideshow, and a giveaway of 10 prints of one of the rarest photos in the family collection, as she stands on a piece of family history as the site was long a part of MGM. As Alicia lives in Australia, this event is a rare treat indeed.

Tickets are available now for this very special event! For more information or to buy tickets go to: http://culvercity100.org!