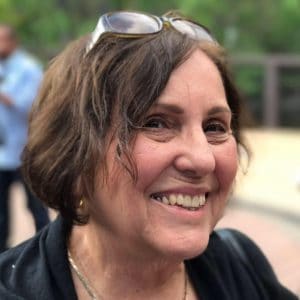 Last Friday, July 21, 2017, surrounded by family in her home in Culver City, Madeline Ehrlich lost her two-month fight with lymphoma and leukemia.

She was born in the small town of Putnam, Connecticut, the sixth child of eight brothers and sisters. After graduating from the Cook County School of Nursing, she became a Registered Nurse and worked in a few of our country’s busiest and most interesting Emergency Rooms: Cook County in Chicago, Bellevue in New York, and County Hospital in Los Angeles.

She met her husband, Paul, 43 years ago, where they both lived in the same apartment building in Santa Monica. They married less than six months after they met. Shortly thereafter, they moved to Culver City which they grew to love.

Madeline became involved in every campaign for city council, school board and other voting measures over the past four decades. Madeline was deeply passionate about education and language immersion. She has a long list of accomplishments, including being a founding member of the Culver City Education Foundation, and founding Advocates for Language Learning which put on the first national conference promoting language immersion. She was elected to serve on the School Board from 1991-1995. While she was President of the School Board, she helped reopen El Marino Elementary School as a dedicated language school and kick off the Japanese immersion program.

Madeline will be sorely missed and survived by her husband, Paul; her children and their spouses Steven Ehrlich, Amy and Rick Dennis, Heidi and Bryan O’Bra and her grandchildren Asara and Kai. Madeline will also be survived by her great nephew, Austin, and niece, Ariel, for whom she and Paul served as foster parents for the past 2 ½ years as well as the unofficial foster aunt and uncle of Josh, who has been living with them since November last year.

Everyone who knew her would agree that Madeline was a force of nature – defined by her sense of generosity, compassion, wisdom, determination, civic duty, and humor. You can evoke her memory by doing an unexpected act of kindness for someone less fortunate.

Madeline’s Celebration of Life will be held at Culver City’s Veteran’s Building in the Auditorium (corner of Overland Ave and Culver Blvd in Culver City) on Sunday, July 30, 2017 from 3 pm -5 pm.

If you would like to make a donation in her honor, we would sincerely appreciate your contributions to either of the following: Advocates for Language Learning (ALLEM) (www.allelmarino.org/) or the Karabo Asara (KA) Orphan Centre (www.gofundme.com/8g6x5uv6k ) which she contributed to founding in South Africa. In the last few months of her life, Madeline was instrumental in helping to create a quilt for the Culver City centennial celebration which will be permanently displayed in City Hall. We will be collecting cash donations for the quilt frame, ALLEM or KA at her Celebration of Life on Sunday.