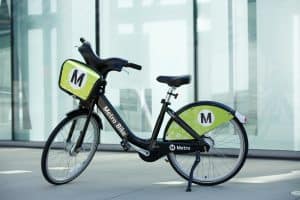 A long agenda led to a lengthy council meeting, and it was closing in on midnight when the vote was called. The concerns over getting things right – so right that this would not have to be reconsidered in another year – led to a great amount of detail in the discussion.

Sam Schwartz presented an exhaustive Feasibility Study, commissioned by the city, comparing the various systems available; Metro Smartbike, CycleHop and Zagster were each presented with pros and cons of their respective systems.  From the report, “The Los Angeles region is one of the last major metropolitan areas to get bike share, with Santa Monica Breeze, Metro Bike Share, and Long Beach Bike Share all launching within the last 18 months. In such a rapidly developing industry, technology, business models, and payment systems are constantly evolving.”

Crucial to Culver City’s decision was who to partner with; the non-contiguous regions of Santa Monica and Long Beach (using one system) or the adjoining areas of Los Angeles like Palms and Mar Vista (that use another.)

The discussion had to address details – using the fare structure of TAP cards or Flex Pass, creating access for people with disabilities,  considering the ‘heat map’ of areas of most usage – and speakers from the innovative bike share industry as well as users and commuters from the area all spoke to the council.

Council member Göran Eriksson was a hesitant yes, noting that “If this were to come to my business, I’d be asking a lot of questions. I’d be considering sending it back [to the consultants] and asking for further study, but I do know time is an important factor here as well.”

Council member Meghan Sahli-Wells, a noted cycling activist, was elated. “I remember when bike share came to Paris, and it’s going to be great for Culver City to be a part of bringing it out in Southern California.”

While there are still many fine points to be confirmed, choosing to go with the Metro plan was perhaps the biggest choice the council finalized last night.

The start date for Culver City Bike Share is projected to be 2018.