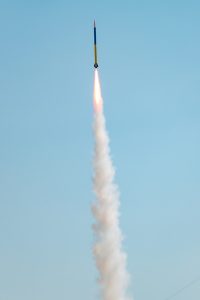 Today is the day in Las Cruces, New Mexico with the late Charley Hoult’s CSULB rocket engineers at the 12th annual Experimental Sounding Rocket Association Intercollegiate Rocket Engineering Competition. When Hoult passed away, he wanted his ashes on a rocket going up in this competition, and his students are making that happen.

Hoult’s student team has named their rocket Hoult On Tight and they will be launching his ashes, as per his request. When the rocket reaches 10,000 feet, the parachute will be deployed and his ashes will be dispersed. His widow Janet Hoult, Culver City’s Poet Laureate, mentioned “I brought a small bottle of ashes along to make sure the team had what they need and, as I talked with other teams and friends from past years, it now looks like Charley will be riding on Brazilian and Egyptian rockets as well as a test rocket from Oregon State that is aiming to reach 100,000 feet.”

At the awards banquet, Hoult will be honored by a technical award to be given to the team which demonstrates their expertise in modeling, simulation and analysis.