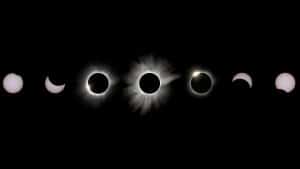 Astronomers and solar physicists will be out in force during this summer’s total eclipse of the Sun (https://eclipse.aas.org/eclipse-america), now just two months away. They’ll use ground-based telescopes, airborne instruments, and orbiting satellites to shed new light on some of the Sun’s best-kept secrets. But if there’s one thing the American Astronomical Society (AAS) wants you to know, it’s that the August 21st solar eclipse is much more than a scientific bonanza—it’s an opportunity for everyone to experience what is arguably nature’s most awesome spectacle.

When the Moon totally blocks the Sun’s bright face (https://eclipse.aas.org/eclipse-america/eclipse-experience), the landscape darkens suddenly, bright stars and planets shine forth in a twilight-blue sky, pastel hues of sunset glow around the horizon, the temperature drops noticeably, and birds and animals behave as if night has fallen. But the star of the show hangs in the sky where the brilliant Sun used to be: the impossibly black silhouette of the Moon, ringed by our star’s faint outer atmosphere: the pearly white, gleaming solar corona. Made of rarefied gas heated to millions of degrees, the gossamer corona gets sculpted into streamers and loops by the Sun’s powerful magnetic field and shines with a light seen nowhere else. It is hauntingly beautiful.

On Monday, August 21st, the Moon’s 70-mile-wide dark shadow will sweep across the United States from Oregon to South Carolina. Some 12 million Americans live within this narrow path, and they’ll be joined by millions of visitors eager to stand in the Moon’s shadow for 2 minutes 40 seconds.

The rest of the continental U.S.—outside the total eclipse path—will see a deep partial eclipse in which the Moon covers half or more of the Sun’s bright face. But a partial eclipse offers almost none of the drama and beauty of a 100% total one. “It’s literally the difference between day and night,” says Fienberg.

Here’s another difference: the totally eclipsed Sun is safe to look at directly. But a partial solar eclipse, even a very deep one, is unsafe to look at directly without using a special-purpose solar filter, namely, one certified to meet the ISO 12312-2 international safety standard (https://eclipse.aas.org/eye-safety/iso-certification). Such filters are commonly available in the form of cardboard- or plastic-framed “eclipse glasses” and hand-held viewers (https://eclipse.aas.org/eye-safety/eyewear-viewers).

“Never wear eclipse glasses while looking through binoculars, a telescope, or a camera lens,” warns Angela Speck, professor of astronomy at the University of Missouri. “Sunlight focused by the optics will burn right through the filters and injure your eyes.” Speck co-chairs the AAS Solar Eclipse Task Force, which is helping to prepare the country for the August 21st event by maintaining the Solar Eclipse Across America website (https://eclipse.aas.org), which provides basic information about the eclipse, links to other authoritative resources, and safety tips.

“If you don’t have a safe solar filter,” says Speck, “you can view the partially eclipsed Sun indirectly, for example, by pinhole projection as described on our website (https://eclipse.aas.org/eye-safety/projection).”

The August 21st total solar eclipse is the first to touch the continental U.S. since 1979 and the first to cross from coast to coast since 1918. It’s also the first to be visible exclusively from the U.S. since we became a sovereign nation.