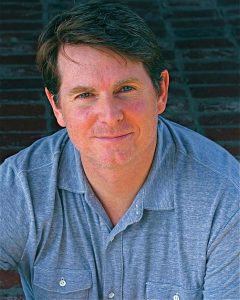 John Benitz found the concept so compelling, he had to go with it. “I read about Andrew Carroll in National Geographic about eight years ago and couldn’t shake this idea of some guy risking life and limb to travel around the globe collecting letters written time of war. Being a theatre person, I knew there was a play somewhere in this story. I approached Andy and we began a collaboration that has lasted these many years and through multiple drafts of the play, I think we have arrived at something totally unique, entertaining and important.”

If All the Sky Were Paper is a powerful, humorous and unforgettable play about one man’s search around the world for the “most extraordinary letters ever written,” and is based entirely on real life war letters—letters written by soldiers and their loved ones during wars from the American Revolutionary War to present emails from Afghanistan.

Directed by John Benitz, (pictured) and produced by Victoria Morris of Lexikat Artists, the play is written by historian Andrew Carroll and is based on Carroll’s search across the globe for extraordinary war letters. The play features letters from Carroll’s two New York Times bestsellers War Letters and Behind the Lines.

His own family connections were not as much of a thread as the current political situation. Benitz noted, “I had an uncle who fought in the Battle of the Bulge, and another uncle who was in Korea … [but] several months ago, just after the election, I felt like a lot of people [felt] and sensed a great deal of anger and division that came about because of the election. It had been about two years since we had done If All The Sky Were Paper at the Kirk Douglas [previous productions were in 2014 and 2015 ] and I just kept thinking about this play and it’s ability to cut through politics and get to something that might unite us instead of divide us.”

Having the star power of James Caan and Annette Bening on hand also gives Benitz a boost to get the message across. But it’s the truth of the words – these intimate, private letters home from the front lines – that compel audiences to feel what veterans have lived through, and what war means both to society and to individuals.

“The life and death circumstances of these letter writers provides a perspective that few experiences in my life have. The humor, love and humanity reflects through the barbarity of war and allows some light to shine in and oddly, though it

is a play about war, there is a healing and redemptive quality about the evening. At least that is my experience with the play and I have been with it since the beginning. So, I approached Eric Sims at the Kirk Douglas about the possibility of doing the show again and he made it happen.” Benitz isn’t satisfied with just getting the audience on board – there is a beneficiary as well.

Culver City based United States Veterans Artists Alliance, helmed by Keith Jeffreys, will garner support from the proceeds. The organization, from Benitz perspective, “just seemed like a good fit … I spoke with Keith and he became a part of our first show at the Kirk Douglas in 2014 and again in 2015. I really respect the work they are doing and want to support them any way possible.”

Jeffreys was equally enthused and effusive. “Speaking for USVAA I have to say we’re thrilled to be a part of If All The Sky Were Paper. Every aspect of this production excites us and as proponents of theater it’s been clear to us that the letters John Benitz and Andrew Carroll selected provide both a rare sense of intimacy and tremendous insight into the lives of military personnel serving during times of conflict.”

Bringing it home feels like a complete circuit.  “This production fulfills our mission,” said Jeffreys “and we can’t thank John, Andrew and the rest of the team for making it happen and bringing it to Culver City”

There’s also the gravitas of the Center Theater Group presenting the show. Benitz stated “Really, they are the drivers of so much amazing theatre in Los Angeles, we count our lucky stars to be producing with them.”

The show is only being presented on June 7, 2017 at the Kirk Douglas Theater. For Tickets, go to  https://www.centertheatregroup.org/tickets/kirk-douglas-theatre/guest-productions/if-all-the-sky-were-paper/ or call 1-213-972-4488.