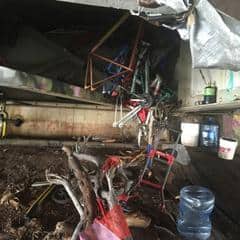 On Wednesday afternoon, May 24, 2017 at approximately 2:00 pm, Culver City Police Detectives responded to the Culver City Julian Dixon Library regarding a theft of a bicycle. During the area check, Detectives located the stolen bicycle and suspect in a homeless encampment under the bridge, in the area of the La Ballona Creek and Centinela Avenue.

A search of the encampment revealed that it was being used as a makeshift chop-shop for bicycles. The Detectives recovered welding equipment, paint and tools commonly used to piece bicycles together.

Along with the aforementioned, Detectives recovered approximately fifty bicycles, that are most likely stolen. This investigation is on-going.