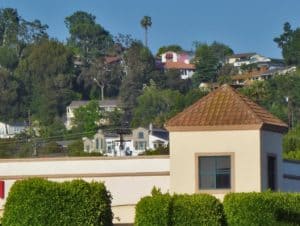 In the next chapter of the Culver Crest community saga, the City Council is offering another public hearing regarding the city’s proposed moratorium on hillside development, and the adoption of the interim ordinance on Tuesday, April 18 at 7 pm.

If the proposed ordinance is passed, it will hold a time frame of ten months and 15 days until building can be considered, all construction in both upper and lower crest will be halted.

The last city council meeting to discuss this on March 20, 2017 drew a huge crowd, many of them neighbors in the Crest, speaking in urgent panic about the landslides of the past and the heavy rains this winter. A proposed development on private property on Cranks Road had many speaking in favor of the proposed 45 day moratorium that was then before the council. The adjacent properties, particularly those on the hillside below, were deemed to be at risk if the development was allowed to proceed.

This next meeting may create another stop-gap measure, holding development for more than ten months rather than 45 days.

The City Council Agenda Item Report will be available for viewing on the City’s website on or after April 11, 2017 at www.culvercity.org, or at the City Clerk’s Office or the Julian Dixon Library, 4975 Overland Avenue, Culver City.