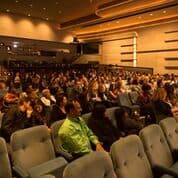 The Cary Grant Theater is always smart; the wonderful screen, the great audio, the luxurious blue seats. On Thursday March 23 it was also filled with smart students, smartly dressed parents and some very smart teachers and administrators for the annual AVPA Student Film Screening.

The seven student films were a rich assortment. From stylish horror (Colette) to creepy zombies (Lockdown) to classic horror/satire (Above Us), from immigration comedy (Bhangara Meets Girl) to immigration documentary (Back Home) and two very straight forward documentaries – Unfollow the Trend, questioning the everyday woman hating of pop and rap music, and Behind Bhangara, a film following the film makers and profiling the AVPA student’s process.

AVPA Film Department Director Alexis Reyes talked about the choices that were made and why in this years offering, saying “Regarding the number of docs this year, I encourage students to try their hand at many genres and styles of filmmaking. I teach a semester long unit on documentary filmmaking and history in Film III, offered during the day at CCHS. This is where “Behind Bhangara” was produced. Additionally, in the fall 2016 semester, the students were enrolled in a West Los Angeles College History of Documentary class co-taught by me and another professor, Evan Charnov.

Within this class the students chose to create the mockumentary, “Above Us.” Within AVPA, we also created “Unfollow the Trend” and “Back Home.” These directors pitched and competed against approximately 20 other ideas for the chance to create their docs. They were very tenacious in their planning and execution as docs don’t often win out over comedy or horror pitches.”

Reyes was very pleased with the films that were screened, and rightly so. She noted “I am so proud of the student films this year. 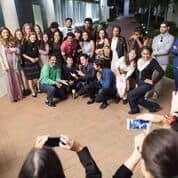 I am the luckiest teacher in the world to be able to teach film history and production within the Academy of Visual and Performing Arts and with the support of Sony Pictures Entertainment. The focus and rigor encouraged in the AVPA program pushes our films into a more professional realm.

“Our production process mimics the Industry and the ways that independent filmmakers approach their work. I have very high standards for the content and the quality of our films and I try to convey this work ethic as a film teacher. When we make effective films and art, we all rise up out of ordinary life and have the potential to change minds and also change ourselves with our work. High school students’ lives are changed positively in AVPA. I loved the speeches and the emcees and the Q & A after the screening at Sony. The students revealed wit, insight and intelligence!”

The full roster of titles that screened at Sony Pictures Entertainment

Back Home
Directed by Zehra Patail

Above Us
Co-Directed by Keely Martin and Bella Chardiet

In addition, all these films also had producers, screenwriters, cinematographers or editors, students doing lighting design, composing and playing scores, and even (as pointed out in Behind Bhangara) the humble station of Craft Services – artists must be fed!

The next time these film makers have a premiere, they will probably recall they started out with all the smarts, and lots of applause.