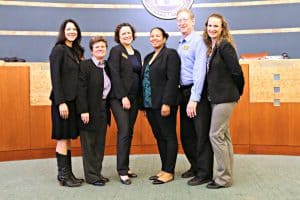 The problems facing the school board on March 14, 2017 were pretty wonderful. Any school board in America would be pleased to have these problems. A president leaving with nothing but praise from her colleagues, an abundance of highly qualified candidates to step into the post, a room filled with supportive community members, and a national award pending. The recent celebration of CCUSD as the fourth most diverse school district in the country gave the meeting a foot hold on which to climb. With the appointment of long time PTA leader Summer McBride, the board voted to solve one of those great problems, and will take on a new member with a strong history of many levels of leadership in the schools.

“Because it is my seat that will be filled, I can’t vote,” School Board President Sue Robins offered, “but I can speak. And I will.”

The Mike Balkman Council Chambers were packed. When an agenda item brings out the community, the atmosphere of the council chambers changes. The number of people in the room does more than raise the physical temperature – it raises the energy, and the level of expectation. When something is happening that fills the seats, it also fills the hearts of those attending. While ‘our schools’ are not completely synonymous with ‘our community’ it’s a very big slice in the center.

When Robins announced her resignation, owing to her family’s need to move to another state, there was a position to be filled. There were 16 applicants that delivered their paperwork to the district, and a resolution drafted to fill the post. The meeting gave the applicants a moment to speak to the board, and the community to add in their thoughts on the appointment.

Her colleagues we unanimous in their praise of Robins, both as a former science teacher and an elected official. Board member Dr. Kelly Kent offered, “I have so appreciated your advocation of science as an educator, and especially your support for girls in science.” Board member Dr. Steve Levin told of his daughter choosing her schedule saying “I just want to sign up for whatever class Ms. Robins is teaching.”

Robins was also vocal about how much she had enjoyed CCUSD, and what her time here had meant to her. On selecting her replacement, she asked that the board “consider the metrics of diversity, and what that offers us. ”

As the process of appointing her successor proceeded, not everyone was pleased with the fact of the post being appointed. Community activist Scott Kecken was one of three speakers who felt an election would have been a better way to proceed. “When we have an elected post to fill, it’s important to the community that it be filled by an election.”

Levin noted that the last school board election had pulled a mere three candidates, and that the field of sixteen that applied to fill Robins’ seat made him hope that some of these names would be on the ballot for the 2018 election. To the applicants, he noted, “It’s also important that you know what we do here and why we do it before you step into the race, so please – come to some board meetings, attend some committees, observe the process.”

All the sitting school board members made the same point; a stellar field of volunteers would make it a challenge to choose just one. Board member Anne Allaire called it “A field of 4.0. Everyone on this list is really a 4.0,”  focusing her background in college admissions, “so it has to be about more than that. What else do they have to offer? ” There was an extraordinary level of education among the candidates; lawyers, master’s degrees in education, multi-lingual and multi-cultural backgrounds. Many, but not all, were also parents in the district.

The recent report calling CCUSD the fourth most diverse district in the country became the rallying point for the supporters of McBride. Board member Kathy Paspalis made an observation that there had not been a board member from El Rincon in at least 15 years. “Diversity is one of our most important attributes in this district – and I look at the board and see all the diversity we don’t have sitting up here.”

Summer McBride, the long term PTA President at El Rincon, garnered a dozen speakers addressing the board on her behalf. Her long career as the President of El Rincon’s PTA had seen the school through a whirlwind of transitions, and was credited as the stabilizing force for many families choosing to remain with the elementary school. Many of her PTA colleagues both from El Rincon and the Council District PTA , where she currently serves as First Vice President, spoke enthusiastically on her behalf.

Noting her large family and many responsibilities, Paspalis asked how she would cultivate support for her job on the board if she were chosen for the position. McBride responded, gesturing to the large population seated on the right side of the chambers. “I bring my village with me!” The crowd erupted into cheers and applause.

“I would not be able to do what I’ve done the last few years, without all of these folks right here. Not just my school, they really are my village. I would not be [stepping into this] if I thought I couldn’t do it justice. I would contribute my time as wisely as I can.”

McBride spoke directly to the value of diversity. “The problem with racial isolation is that there is a lack of understanding. We have students at our school from Fox Hills, from Culver Crest, and from [residential] hotels.  There has to be intersectionality for us all to fight for each other’s causes. [El Rincon is] a diverse school. We are underrepresented. We need to be able to say that this district supports every student.”

The vote was cast with four ayes confirming McBride as the new school board member.

Sue Robins resignation will be effective on March 30.