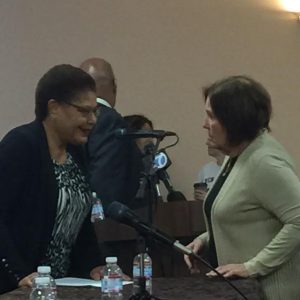 “I stopped wondering what I could do, and started wondering what we can do.”  A nine year old boy named Austin who had waited his turn for the microphone at the Iman Center on Motor Avenue on Sunday morning got a loud round of applause from the room.  His comment captured the spirit of the event; people thinking about politics and community.

A crowd of well over 500 people turned up for the rainy weekend event – all chairs were filled and the standing space in the back packed to capacity, people sat on the floor in front of the dais and the stage behind the speakers.

Headliner Karen Bass (D- 33) introduced Sea Change as a political action committee to address the current political moment. “There are no taxpayer dollars being spent on this town hall, this is a volunteer event.”

The Democratic strategy was straightforward, introducing speakers and representatives for the 25th congressional district who were looking for volunteers and funding to help ‘flip the district’ in the 2018 election.

Noting that “The 25th was one of the districts in California that voted for Hillary, but also ended up with a 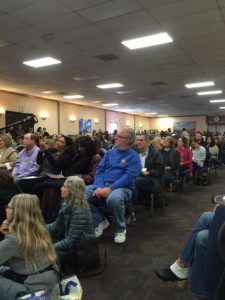 Republican congressional rep. We can help turn that seat if we start now.” Bass acknowledged that what the Democrats had done in the last election cycle had not been enough. “We can’t show up and start registering voters three months before the election. We need to start the conversation now.”

After a series of brief addresses from the panel, the microphone was opened for those who wanted to ask questions or make statements.

While most who approached the microphone were supportive of Bass, not all the questions were easy. More than one person wanted to know why she missed so many votes in congress, and why she had not signed on to co-sponsor certain bills. Bass reminded the audience that her responsibilities on the House Committee on Foreign Affairs often had her traveling. As for the bills, she asked her constituents to point out to her and remind her what bills they wanted her support on. “There are more than a thousand pieces of legislation on my desk, I’d love to get your input on what is most important to you,”

The crowd had a long list of concerns, notably the Republican pressure to end the Affordable Care Act, the threat of a new immigration ban, and the fear of deportation raids.

Many offered their own credentials; non-profit groups, Democratic clubs, neighborhood action networks and feminist organizations all thanked Bass for her leadership, and pledged their support for the 2018 election.