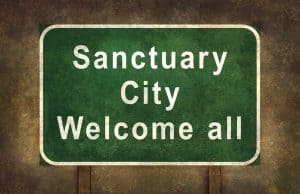 The City Council Meeting of Feb 13, 2017 already had a lengthy agenda, but much of the crowd attending were there about an item they wanted on a future agenda; making Culver City a sanctuary city. More than a dozen speakers were able to address the council at the beginning of the evening, calling for the council to agendize.

Rebecca Rona Tuttle told a story of a student of hers, Angelica, who would not speak in class. “Can you imagine her fear, and how it prevented her from participating?” When she and her family were deported, Rona Tuttle noted “I never saw her or heard from her again.”

Marsha Temple, a professor at West Los Angeles College, noted “This is the moment when we decide if we are on the right side. We ask that Culver City commit to being on the right side of history.”

Lisa Schultz, owner of the Whole 9 Gallery on Main Street, offered that her space was open to anyone who wanted to organize.

Paula Amazola De Herrerra spoke of own mother being deported. “Our home is a sanctuary. People need to know what their rights are. Do not open the door [to immigration agents]. Because of the color of my skin, and my last name, I am in fear. Support SB 54 by Kevin De Leon.” She said that after getting Masters Degrees from UCLA, she and her husband chose to move to Culver City because of it’s diversity.

Prisca Gloor spoke of growing up in Switzerland, wondering about what she would have done in the Third Reich, and noting we are on the way to the Fourth Reich. “We need to assure our people that they are safe.”

Marnie Zimmerman, in an Australian accent, said “I’m an immigrant – but I have privilege; I am white,  I am educated, and I can go back to my own country if and when I like. . . Many of our children are terrified that their parents will not be there when they get home.”

Noah Zatz, who had emailed the council on behalf of the Culver City Action Network, spoke at some length.  “We face a series of choices whether to aid the administration in their discriminatory practices, or not. Collectively we can benefit from safety in numbers.  The times we are living in call for courage.”  He cited the cities that have already passed sanctuary resolutions – Boston, San Francisco, San Jose – and asked “Why can’t Culver City be one that list ?”

Zatz cited the resolution passed by the school district in November, and closed by saying “Everything [the administration seeks to do] requires the cooperation of ordinary citizens. Not in our house, not on our dime, not in our name. ”

Four votes on the council – all voting aye except Mayor Jim Clarke – led into agreement to putting the item on a future agenda.

Council member Megan Sahli Wells spoke to the issue, saying “thank you for being specific in what you are asking for. The mayor and I spoke with the police chief today, about if he and his folks are willing to have a community meeting to discuss that. We’d also like to support the California values act – SB 54.”

Council member Gōran Eriksson noted that “I am an immigrant, and we know that CCPD is not handing people over to ICE, and has never handed anyone over to ICE.”

Council member Cooper stated ” In 37 years we have never checked on anyone’s citizenry. I believe in the symbolism of being a sanctuary city. I’d be fine agendizing this for discussion.”

Mayor Clarke sounded a note of caution “This idea of being a sanctuary city is still in flux. I am not going to be in the position to tell our police to violate a law. We are doing everything we can to be a city of kindness.”

Finally, the council opted to hear support for the California Values bill, SB 54, on February 27, and put the idea of sanctuary city on the agenda for the meeting on March 27.

Editor’s Note – Several of the agenda items that were addressed at the Feb 13 meeting will be covered later in the week.