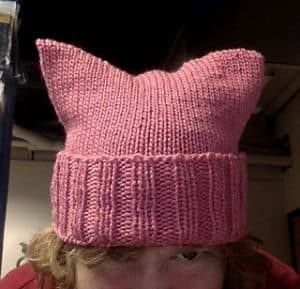 I am replying to your request to describe “Why I Marched.”

I know it’s important to you to understand why your constituents felt the need to organize a mass demonstration, as a part of many mass demonstrations around the world, in response to the installation of the new federal administration. I want to be very clear.

I marched because watching the least qualified man ever to seek office win over the very highly qualified woman made me feel as if reality itself had collapsed.

I marched because I am a cancer survivor whose life was saved by Obamacare; specifically by a test that led to early detection and surgery, allowing me to continue running my businesses, raising my children, and living my life.

While I’m on the subject – I’m an entrepreneur and a single parent. I do not take for granted any of the rights my mother and my grandmother worked hard for and won at the ballot box. I’m fully aware that women only recently have the right to own their own property, or raise their own children.

I marched because I am bored to tears by people using the term “feminist” as an insult. Or claiming it doesn’t matter. It matters.

I marched for my daughters, my two smart, talented, hard working daughters, who deserve to get equal pay for equal work when they are old enough to enter the work force.

I marched because I deserve equal pay. I have never had that experience; not in corporate jobs, not even as an independent. The men who hold similar professional positions in my community are routinely excused for the most hateful statements and unethical business practices you can imagine. (Boys will be boys, you know.)  Despite the fact that I consistently do a better job, I am not recognized for it. (She’s just a girl, you know.)

I marched because I have used just about every form of birth control available over a span of more than 40 years, and all of these should be available to everyone, regardless. Without any standard, any qualification, any asterisks at all. That’s a personal decision. That’s called choice.

I marched because Planned Parenthood saved my life with a blood test – and that had nothing to do with my sexuality.

I marched because I am a rape survivor, and the federal administration is cutting funding for programs that address violence against women.

I marched because it seems that people who voted Republican seem to feel that men have the right to assault women without any consequences at all.

I marched because massive community activism is the way to create influence when we are shut out at the polls. I am not old enough to have marched in the 1960’s, but I have siblings and cousins who did. I have studied the student marches and the anti-war movement of that era. I have also studied the anti-Nazi resistance of Europe in the the 1930’s and 40’s. Important lessons there.

I marched because I live in a democracy where I can do that. For most of my life, I have lived with the idea that I elect people to represent me, and they do their job, leaving me to free to do mine. It’s clear that this federal administration does not represent me, or the majority of the people in this country, and is hell-bent on stripping away the rights and protections that the Constitution assures me.

I marched because now that is part of my job.

So, if just one woman marched for all those reasons, imagine how many reasons all these women have for marching.

Thank you for all your service. I have voted for you many times. Now, I need you to vote for me.

No approval, no compromise, no retreat.