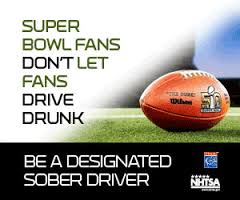 Football fans across the country will tune in to the Super Bowl on Sunday, February 5 and for many, the event often includes alcohol. The California Office of Traffic Safety and Culver City Police Department are teaming up with law enforcement across the state for a special Fans Don’t Let Fans Drive Drunk campaign to urge all football fans to call the right play on Super Bowl weekend and pass the keys to a sober driver before the drinking begins.

Culver City Police Department will deploy additional officers on special DUI saturation patrols specifically to stop and arrest drivers showing signs of alcohol or drug impairment during and following the game. As part of the Super Bowl Sunday enforcement efforts, police, sheriff and the CHP will be on heightened alert ready to stop and arrest any impaired driver.

Impaired driving can be deadly. A driver is considered alcohol-impaired with a blood alcohol concentration (BAC) of .08 or higher, but even a small amount of alcohol can impair judgment and reaction times enough to make driving unsafe. Drugs such as many prescription medications, marijuana or illicit drugs can also lead to impairment and unsafe driving leading to a DUI.

“Volunteer to be a designated driver to help your family and friends get home safely,” said OTS Director Rhonda Craft. “Impaired driving only leads to disaster and tragedy. It is never worth the risk. If you do plan to drink, and/or are taking medications or using marijuana, plan now to pass the keys to a sober driver before kickoff.”

Drivers are encouraged to download the Designated Driver VIP, or “DDVIP,” free mobile app for Android or iPhone. The DDVIP app helps find nearby bars and restaurants that feature free incentives for the designated sober driver, from free non-alcoholic drinks to free appetizers and more. The feature-packed app even has social media tie-ins and even a tab for the non-DD to call Uber, Lyft or Curb.

For those who plan to drive, refrain from any alcohol and be aware of possible drug impairment. Instead, enjoy the game with food and non-alcoholic drinks. This Super Bowl weekend, be a team player and help keep impaired drivers from getting behind the wheel. And remember: Fans Don’t Let Fans Drive Drunk.

This enforcement effort is funded by a grant from the California Office of Traffic Safety, through the National Highway Traffic Safety Administration who reminds everyone to be alert and ‘Report Drunk Drivers – Call 911’ if you see a dangerous driver call immediately!