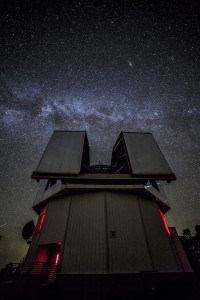 The instrument at Lowell Observatory in Flagstaff, Arizona, used by Clyde Tombaugh to discover Pluto is about to undergo renovation. The year-long project, which began on January 12, will include restoration of both the historic telescope and the wooden dome that houses it. While the telescope will be removed from the dome during this work, the dome will be open from time to time for public tours as work allows.

The Pluto Telescope and its dome date back to the late 1920s, when Lowell Observatory recommenced the search for founder Percival Lowell’s theoretical “Planet X”. In the nine decades since, some areas of the dome have rotted, a few of the telescope parts have worn out, and the others need to be cleaned or stripped and repainted. The renovation will address these issues, as Lowell’s technical staff plans to replace part of the dome wood and then weatherproof the entire facility.

The Pluto Telescope is technically known as an astrograph, a telescope specifically designed for taking photographs of objects in space. In addition to Tombaugh’s 1930 discovery of Pluto, the instrument was also used by Lowell astronomers to study comets and asteroids, as well as stars with measurable proper motion (apparent angular movement). But it is the Pluto discovery that continues to generate public interest in the facility, resulting in ever-increasing visitation from guests around the world. In 2016 alone, Lowell welcomed a record 100,000 visitors.

The renovation comes two years after a similar effort on Lowell’s historic 24-inch telescope and will be carried out by the same team of Lowell technicians. Like that instrument, the lens of the Pluto Telescope, measuring 13-inches in diameter, was crafted by the Alvan Clark and Sons telescope making firm of Cambridge, Massachusetts.

Lowell Director Jeff Hall said, “Like the Alvan Clark refractor across campus, the Pluto Discovery Telescope is a national treasure. People come to Lowell from all over the world to see these historic telescopes, and I’m so pleased to see them restored and preserved for decades to come.”

The Pluto Telescope and dome renovation will cost $155,000, all of which Lowell’s development team has raised through crowdsourcing, private donations, and a grant from Crystal Trust. Hall said, “We can’t undertake major projects like this without external support, and we’re grateful to everyone who has donated to make this happen.”

While a young researcher working for the Lowell Observatory in Flagstaff, Arizona, Tombaugh was given the job to perform a systematic search for a trans-Neptunian planet (also called Planet X), which had been predicted by Percival Lowell and William Pickering.

Tombaugh used the observatory’s 13-inch astrograph to take photographs of the same section of sky several nights apart. He then used a blink comparator to compare the different images. When he shifted between the two images, a moving object, such as a planet, would appear to jump from one position to another, while the more distant objects such as stars would appear stationary. Tombaugh noticed such a moving object in his search, near the place predicted by Lowell, and subsequent observations showed it to have an orbit beyond that of Neptune. This ruled out classification as an asteroid, and they decided this was the ninth planet that Lowell had predicted. The discovery was made on February 18, 1930.