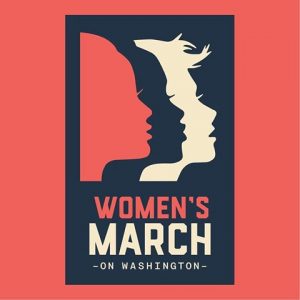 I went to Washington D.C. and we marched. It was amazing.

There have been very few times in my life I have felt myself a part of something this big, this world changing. When we organized to get the County of Los Angeles to divest their holdings in South Africa during apartheid, it was powerful, but it was not one event.

This was all over the world, in one day.

We can lay to rest forever the tired old trope that ‘feminists don’t have a sense of humor.’ The signs in this crowd were hilarious. Magic marker and glitter paint, crayons and Sharpies on poster board. We are a witty, angry people.

“We are Not Ovary-acting”  – “I’m With Her” featuring arrows in all directions. -“Now You’ve Pissed Off Grandma” “Get Your Tiny Hands Off My Rights” “Orange is Not the New Barack” and, tellingly, “Free Melania”

We chanted “The Future is Female” and “This is What Democracy Looks Like.” We sang “This Land is Your Land, This Land is My Land.”

The most vivid and visible sign was our hats.

I had seen the hats of those who came to attend the inaugural – a hard red, factory manufactured (in China, I suppose) every one identical. I have never been in a city where what you wore on your head proclaimed what was inside it so clearly.

I was really struck by the fact that our uniforms were homemade. All those hats; knitted and sewn, every shade of pink and red imaginable. I thought of Confederate uniforms, the homespun cloth of the rebel army, but we are not a rebellion for states rights. We are about women’s rights, and women in every state and country who deserve autonomy and respect.

We could do it all individually and do it all together. This is the metaphor that rings true for me, and I’ve often felt frustrated by it as a weakness that keeps us from reaching our goals.  The left has room for diversity, tolerance for differences. The right does not. It has made the Republican ability to march in lockstep into a goose-steppe. Our march was more of a slow stroll, with a lot of samba and some spontaneous jazz.

At our gathering, we danced. We cheered each other on. Union signs, rainbow flags, safety pins. Drums and tambourines.

And Hillary was with us. On our t-shirts and our posters, our chant “We are the popular vote.” Every woman I spoke with said she voted for Hillary, every one.

When I spoke with Sue from Memphis and Annie from Chicago, and Emily from Arizona and Kathy from Ithaca, we all asked each other the same question; what now? What next?

We were all in agreement. Daily action. Wider connections. Reaching out to the red baseball caps. Committing to ourselves and each other. Local office. State contests.

First we march, then we run.