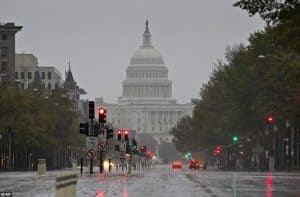 I’m on a road trip. The rain I woke up to this morning is falling in a forest in Maryland, and it feels like a dark day. I’m here for the Women’s March tomorrow, but first, there is today to get through. Just one step at a time, one foot in front of the other.

I traveled with an interesting collection of people. Old literature major that I am, every journey feels a bit like Chaucer’s pilgrimage, a bit like Boccaccio’s party fleeing the plague.  We fall in together for reasons we understand, and reasons we don’t. But we know we will get there if we all go together.

My seat mates for the first leg of the trip were coming for the inauguration, a married couple stressed about missing a phone call from their child’s school. They had a lot to discuss, and I wondered if perhaps this was the first time they’d had each other’s attention in awhile. They seemed to be very low key about the the inauguration; the party they were to attend was downgraded to “we’ll make an appearance” and there was some anxiety over having to get their tickets for the ceremony. I was intrigued over their business conversation. There was a script that needed to be downloaded so as to be read, and there was a real estate development that had to have ‘affordable housing’ included. He quickly translated that as “including the riff-raff” and reminded her that they would just stall until that provision was dropped. He reminded her that ‘If all this goes, if we get the green light, we will be flying in first class.” In the meantime, he was not going to pay $9 for a sandwich. Absolutely not.

Just listening to them, I could sense their concerns like cartoon balloons floating above their heads. They love their children, and money is tight. They don’t trust poor people, but they are not poor – just temporarily broke. The next deal will solve all the problems and pay the bills, and they will be justified.

Second flight was several women coming for the march. I sat between a graphic designer on her way to visit her grandchildren who had just been laid off from her full time job that morning, and a television writer who was looking for a new gig. We had the kind of conversation that three women would expect to have in January of 2017; civil rights, healthcare, the economy, Hillary and what now? The plans for the march had us trading phone numbers and shaking hands as we parted. Maybe we’d see each other soon.

Talking with them, we are hopeful and sad, inspired and frightened.

Last tail of the journey on the Metro, I was surrounded by people wearing Trump hats, Trump shirts and lots of American flag gear. Not one of them had horns or a tail, but they were all the same ethnicity. Several locals of a much richer complexion looked askance from the other end of the train car. But no one was talking politics. We talked about public transportation, the weather, the rain.

With my Pink Fairy backpack and my polka dot carry-on, no one asked me if I was there for the march, but I think it was pretty obvious.

As the Trump crowd debarked for their hotels, I was left on the train with a tall man wearing several pounds of dreadlocks. He looked at me and gave me an approving nod as he got off the train. I gave him a smile.

I rode to the end of the line, thinking Shady Grove sounded like an episode of the Twilight Zone.

But it the rain here is much like the rain at home. As the saying goes, into each life, a little rain must fall. And we will get through this, one step at a time, all the way to the capital.