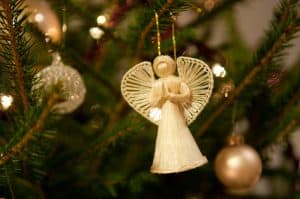 It’s not often I find myself a slave to tradition, but holidays seem to hold me. I have to leave the tree up until January 6th; it’s the Epiphany, or the Feast of the Three Kings, or the 12th Day of Christmas, depending on what you name it in your tradition. Calling it the sixth of January works just fine for plenty of people. My mother often joked she’d be just as happy to leave it up until Valentine’s Day, although that seemed to be an equal measure of enjoying the beauty of the decorations and avoiding the housework involved in taking them all down.

There’s no spiritual or housewifely extra credit involved in leaving it up after the sixth. I just get to it as soon as I can. There is always some small element- a candle holder, a picture frame -that stays and becomes a part of the year-round decor, so I can remind myself that holidays will come again.

When I found myself taking down golden ornaments and angels while watching Obama’s farewell speech, I thought about what we were all taking down, and what it would mean to us to put this away.

To be honest, I was not originally an Obama supporter. Way back in 2008, I thought Hillary Clinton should have won the Democratic nomination, but I was not all that surprised that she lost. When it comes to tradition, America’s hatred of women is far older and much more intense than our racism. Note the distance between the 15th Amendment and the 19th Amendment, and that pretty much speaks for itself.

I was and am still shocked that she lost in 2016, but that’s a whole other essay.

Over the last eight years, I have been very impressed with Obama. More than anything else, his sense of dignity has kept him distant from the nonsensical attacks on his policies and his person. It’s Michelle’s line, but “When they go low, we go high” sums up the attitude that has kept this Presidency above the ugliness of the racism thrown at it.

As I listened last night, I listened to a leader who helped to save my life – without Obamacare, my cancer would certainly have killed me – talk about what is sickening our political system.

I was listening to the speech on Facebook and the comments rolling next to it astonished me. The extremity of emotion – I adore Obama! I despise Obama! was too over the top to even be called hyperbole. Still, it’s easy to imagine a collection of Americans sitting around their radios 75 years ago, expressing the same worship and vitriol toward FDR – He is our savior!  He is the anti-christ! They just didn’t have the ability to share that with strangers in front of another radio.

Our technology has evolved so much faster than our ability to use it well, it’s come to a point where we are harming ourselves, harming each other, and taking it all down with us. The way that our emotions are pulled in before our intellect can engage makes it less possible to have a discussion and more likely to have an argument. Online, it takes less than a second for an argument to turn into a squabble. We have forfeited the ability to take in information and respond. We just respond from our pre-programmed assumptions, and feel a bit more ire towards those who don’t agree.

Or maybe it’s the tone that’s set by the larger media. Since the Reagan Administration gutted the fairness doctrine, there is no legal requirement that news be true. It’s “news.” More and more news panders to a lower level of ‘infotainment’ as an attempt to keep or capture an audience, the content takes on the tinge of a circus tent.

I’m certain we can disagree without name calling, without swearing, without sexual innuendo, without this toxic rancor.

As we pack up our tradition of acceptance – because I for one am not willing to accept the kind of leadership that the new administration has to offer – I will be keeping communication open. It’s not only possible to refuse to accept this administration, it’s necessary. And it’s vital to do it without hysteria, without hyperbole. I will do my best to ensure that civility stays present. I’ll keep a candle burning for civil rights and for freedom. And remind myself this too, shall pass. I’ll be unpacking my angels again.