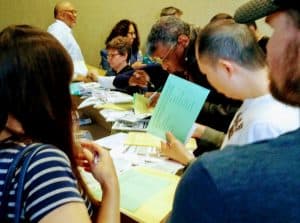 Culver City’s Veteran Memorial Building was a scene of mass chaos Sunday Janaury 9, 2016  as Democrats from California Democratic Assembly District 54 caucused and elected local delegates to the California Democratic Convention. For most who attended, it was their first vote at this level of politics.

Many voters supported former Democratic presidential candidate contender Bernie Sanders, and were inspired by his call to a revolution of change. Others were inspired to protect their values from president-elect Donald Trump.

“I didn’t like the way they treated Bernie,” said Micah Crown-Hunt, who considered running, but was there to vote. “I want to return Democrats to their roots. We need a new generation of leadership and change.”

The Rotunda Room and entry hall were bedlam from before 2 p.m.to well past 4 p.m.as their sheer numbers overwhelmed local organizers who bravely did their best to meet demands. Flyers from slates and individual candidates snowstormed the Rotunda room, covering chairs, tables and the floor as the lines in the lobby to get ballots seemed never to shorten.

Convener Jim Clarke said the initial 300 ballots disappeared quickly and at least three more reprints were needed to serve everyone who was still in line at the 4 p.m. cut-off. The ballot boxes were filled to capacity.

Many voters said they were related to, friends of, worked with or neighbors of one of the 65-plus candidates running.

First timer Jade Carter, urged to vote by a politically-active neighbor, stood in line for 30 minutes only to have the clerks run out of ballots three people away in his line. He waited another 30 minutes for more to be printed, but warned his mother in a text not to come if she hadn’t already voted. Nevertheless, he felt the wait was worth it to participate in the democratic process.

This was American politics at its grass roots, formed at Assembly District meetings where decisions are made on which candidates to endorse and which changes are needed by all party members who attend. Most members, even those who vote in off-year and special elections, never get to a caucus. But 2016 was a banner year for change, not just in who was elected and who ran, but by spreading the concept of how democracy works and what a citizen’s responsibilities are.

Once attended only by political junkies and hopeful candidates and shunned by most party members, the delegate race had voters showing up in droves. There were 80 elections held on the weekend around the state, each electing 7 female and 7 male delegates who will hold local meetings and attend regional and California Democrats Conventions for the next two years, right through the federal mid-term elections.

Attorney Nathan Meyer ran out of flyers promoting his candidacy. He engaged voters waiting in line with his support for a two-party solution in Israel and alarm at the fact-challenged approach to global warming of the Republicans while passing out sheets of lined paper from his notebook with his name scribbled on them.

“The 2016 election was a call to serve,” he said, “a call to participate to a greater extent within the party.”

Photo Caption- Democratic Party workers from Assembly District 54 were steadfast in the face of a tsunami of more than 500 voters.