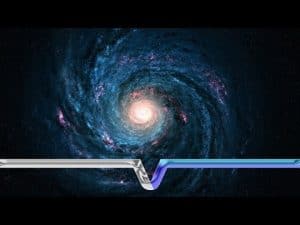 One of the rare and brief bursts of cosmic radio waves that have puzzled astronomers since they were first detected nearly 10 years ago has finally been tied to a source: an older dwarf galaxy more than 3 billion light-years from Earth.

Fast radio bursts, which flash for just a few milliseconds, created a stir among astronomers because they seemed to be coming from outside our galaxy, which means they would have to be very powerful to be seen from Earth, and because none of those first observed were ever seen again.

A repeating burst was discovered in 2012, however, providing an opportunity for a team of researchers to repeatedly monitor its area of the sky with the Karl Jansky Very Large Array in New Mexico and the Arecibo radio dish in Puerto Rico, in hopes of pinpointing its location.

Thanks to the development of high-speed data recording and real-time data analysis software by a University of California, Berkeley, astronomer, the VLA last year detected a total of nine bursts over a period of a month, sufficient to locate it within a tenth of an arcsecond. Subsequently, larger European and American radio interferometer arrays pinpointed it to within one-hundredth of an arcsecond, within a region about 100 light-years in diameter.

Deep imaging of that region by the Gemini North Telescope in Hawaii turned up an optically faint dwarf galaxy that the VLA subsequently discovered also continuously emits low-level radio waves, typical of a galaxy with an active nucleus perhaps indicative of a central supermassive black hole. The galaxy has a low abundance of elements other than hydrogen and helium, suggestive of a galaxy that formed during the universe’s middle age.

The origin of a fast radio burst in this type of dwarf galaxy suggests a connection to other energetic events that occur in similar dwarf galaxies, said co-author and UC Berkeley astronomer Casey Law, who led development of the data-acquisition system and created the analysis software to search for rapid, one-off bursts.

Extremely bright exploding stars, called superluminous supernovae, and long gamma ray bursts also occur in this type of galaxy, he noted, and both are hypothesized to be associated with massive, highly magnetic and rapidly rotating neutron stars called magnetars. Neutron stars are dense, compact objects created in supernova explosions, seen mostly as pulsars, because they emit periodic radio pulses as they spin.

“All these threads point to the idea that in this environment, something generates these magnetars,” Law said. “It could be created by a superluminous supernova or a long gamma-ray burst, and then later on, as it evolves and its rotation slows down a bit, it produces these fast radio bursts as well as continuous radio emission powered by that spin-down. Later on in life, it looks like the magnetars we see in our galaxy, which have extremely strong magnetic fields but rotate more like ordinary pulsars.”

In that interpretation, he said, fast radio bursts are like the tantrums of a toddler.

This is only one theory, however. There are many others, though the new data rule out several suggested explanations for the source of these bursts.

“We are the first to show that this is a cosmological phenomenon. It’s not something in our backyard. And we are the first to see where this thing is happening, in this little galaxy, which I think is a surprise,” Law said. “Now our objective is to figure out why that happens.”