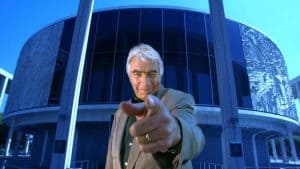 This Monday, Center Theatre Group will hold a celebration in honor of its Founding Artistic Director, Gordon Davidson, beginning at 7:30 p.m. at the Ahmanson Theatre. The theatre will open at 7 p.m. An evening of stories, remembrances and performances, the celebration will be open to the public. Though this is not a ticketed event, RSVPs are encouraged; please see the link below.
“Gordon Davidson was one of the most renowned and respected artistic directors in regional theatre, in part because he was one of the original founders of the entire concept,” said Center Theatre Group Artistic Director Michael Ritchie. “He led Center Theatre Group for 38 years and produced one of the broadest arrays of plays, particularly new plays, of any theatre in the country. Without his prolific vision for Center Theatre Group 50 years ago, the theatrical landscape in Los Angeles, and the country, would be very different. He remains one of theatre’s great leaders and I am proud to call him a mentor, friend and colleague.”

From 1967 to 2005 Gordon Davidson was the Artistic Director of the Center Theatre Group/Mark Taper Forum at The Music Center. Davidson was also the Producing Director of the Center Theatre Group/Ahmanson Theatre for 15 years, and the Artistic Director of the inaugural season (2004-2005) at the Kirk Douglas Theatre. In addition to redefining theatre in Southern California, he was one of the founders of the regional theatre movement and had a permanent impact on theatre throughout the country and the world.
Gordon guided hundreds of productions to the Taper stage while overseeing numerous special projects sponsored by the Taper. This work, and his direction of many plays staged at the Taper, were acclaimed both in Los Angeles and New York, garnering the Taper a Tony Award for theatrical excellence in 1977.
Gordon was born on May 7, 1933, and passed away Sunday, October 2, 2016. He is survived by his wife, Judi; their children, Adam and Rachel; and five granddaughters.

RSVPs are encouraged, but not required. Please visit www.centertheatregroup.org/tickets/ahmanson-theatre/additional-events/gordon-davidson-celebration/rsvp.