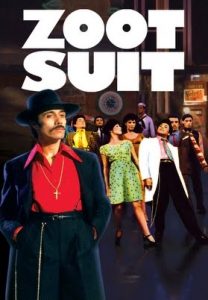 Tickets for Center Theatre Group/Mark Taper Forum’s production of “Zoot Suit” go on sale Friday, November 18, 2016, with a celebratory on-sale event from noon to 3 p.m. in front of the Ahmanson Theatre on the Music Center Plaza in downtown Los Angeles.
Plaza events will include zoot suit-wearing dancers and models provided by El Pachuco Zoot Suits, Inc. clothing company and Barrio Dandy; and live music from the Ragsdale Quartet featuring Alexis de la Rocha. Patina’s Tina Tacos will be open for the event and food trucks will also be accessible near the plaza. Events will be live broadcast on KTNQ 1020 AM and KRCD Recuerdo 103.9 FM/98.3 FM.
The event will also feature a buy one ticket get one free offer for “Zoot Suit,” in person only on November 18 from 12 – 8 p.m., with a limit of two free tickets per person. Tickets will also go on sale that day for “Archduke,” “Head of Passes,” “Water by the Spoonful,” and “Remote L.A.”
Presented in association with El Teatro Campesino, “Zoot Suit,” one of the Taper’s most iconic original works, will kick off Center Theatre Group’s 50th anniversary season at the Mark Taper Forum. Written and directed by Luis Valdez, “Zoot Suit” begins previews January 31, opens February 12 and continues through March 12, 2017.
“Zoot Suit” was originally commissioned and developed by Center Theatre Group, playing for nearly a year in Los Angeles first at the Taper from August 6 to October 1, 1978, then at the Aquarius in Hollywood from October 10, 1978, through July 1, 1979. It went on to become Broadway’s first Chicano play and was made into a major motion picture that became a cultural phenomenon.
Nearly 40 years after its world premiere, original creator Valdez will once again fill the Taper’s stage with a company of 25 actors, singers and dancers weaving fact and fiction together as they portray the events surrounding the infamous 1942 Sleepy Lagoon murder in Los Angeles. Filled with heart, sly wit and the infectious songs of Lalo Guerrero, “Zoot Suit” remains an urgent portrayal of the clash between generations in a Chicano family, the rifts between cultures in America and how racism and injustice can haunt a city and a society.