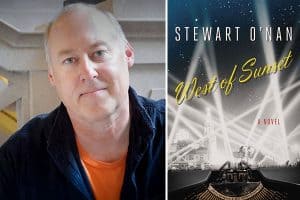 “He’d just lost everything. He was at his lowest point when he came here, and still, it was just hard for him to play the game. He cared too much.” As Stewart O’Nan talked about F. Scott Fitzgerald, the protagonist (if not the hero) of his most recent novel, West of Sunset, he was looking around the buildings and alleyways of Sony Studios in Culver City. All this had been the site of Fitzgerald’s last stand, the job as a screenwriter that he had hoped would pay his debts and get him writing again.

O’Nan was in town on Friday, Oct. 14 to be celebrated as part of the Culver City Centennial, the Culver City Friends of the Library having chosen West of Sunset for their “One Book, One City” Centennial reading project. Fitzgerald’s adventures in screenwriting coincided with what many think of as the first golden age for Culver City, before munchkins were replaced by menus as the hot topic of conversation downtown.

“Fitzgerald was a writer who really cared about language, cared about quality, and the assembly line of writers, and all the studio politics that went with that – he just couldn’t take it, he wasn’t a writer who could work like that.” O’Nan looked at the pale Art Deco buildings and mused, “It was a paycheck, but it didn’t allow him to write the way he needed to.”

When the place belonged to Metro Goldwyn Mayer and cranked out movies on a weekly schedule, Fitzgerald’s office – the screenwriter’s space – was nicknamed “The Iron Lung” to commemorate the fact of being the only air-conditioned building on the lot. It’s now the executive offices of Colombia Pictures, with a lobby full of Academy Awards on display. West of Sunset puts in many working days at the Iron Lung, with Fitzgerald talking with other writers at the same gig, Dorothy Parker and Robert Benchley.

While West of Sunset focuses in on Fitzgerald at a certain point in his life, most readers will know upfront that it isn’t long until the closing credits. O’Nan generously gives Fitzgerald time to look back at his life and revisit his past, mining crucial moments for meaning and looking for the language that will enlighten him about the choices he made.

Choosing to write about Fitzgerald was a natural for O’Nan, whose novels often begin with the ‘lowest point.’ O’Nan was candid about his fascination with despair. “That is when things get interesting, that is when people really have a moment to change. Some can and some can’t. Scott just couldn’t, he was too much in love with the poetry of loss.”

With local discussion groups finished, the Centennial reading project has come to an official close, but many in Culver City are still talking about the book, as a part of the history of the industry that has shaped the town from the beginning.

An historical note that did not make it into the novel – when Fitzgerald suffered his fatal heart attack, the apartment building manager who tried to come to his aid was Harry Culver, still a few years ahead of getting a charter to create his city, “The Heart of Screenland.” Ironically, Hollywood was also the scene of Culver’s death years later.

O’Nan is looking at the past through a different prism; he is currently at work on a companion book to his novel “Emily, Alone” centered on the character of Henry, beginning with his birth. Not an obvious low point, but clearly a place to begin. The novel is scheduled to be published in 2017.