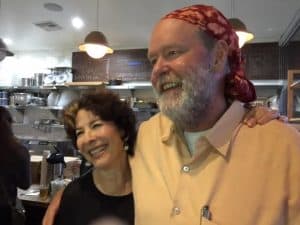 Henry Miller is my standard bearer in my campaign through the world of books.

No one who’s known me for any length of time will be surprised to learn that Henry Miller has been my literary cicerone since I was about 12-13 years old and opened Tropic of Cancer for the first time. I spotted it in a thrift shop and purchased it for 75 cents, which was all I had to my name. It was 1963 or so, and people were talking about Henry Miller and about the book in ways that made it absolutely irresistible to a curious teen age boy. At least to this one.

It changed my life, forever, for the better. I took it to junior high school with me the next day, and found myself in the principal’s office in short order. My father was summoned from his office, which did not please him. A highway engineer, he was in the process of designing a huge overpass for the new Highway 5 just south of downtown Stockton, and he didn’t like the way the principal kept him standing in front of his desk while he (the principal) lectured my dad about the irresponsibility of allowing such a book to fall into the hands of a teenager. When he paused for a breath, my dad reached out, grabbed the book off the principal’s desk and backhanded it 10 feet across the room to me. I caught it, of course, because it wasn’t the first time my father had ever thrown anything to me. And my dad said, not too loudly but incredibly powerfully, “My son can read ANY book he wants to read.” I had never, and I HAVE never been any prouder of my father than I was at that moment. Every bit as good and as valuable as the day he put the basketball hoop up on the garage for us (by “us” I mean “him and me.”)

It’s probably fashionable again to disapprove of Henry Miller, his perceived misogyny and narcissism. But he doesn’t need me to defend him from those charges. There are his books, and there are the books by the women who couldn’t HELP but love him because he was, as he described himself, “the happiest man alive.” Collette, Anais Nin, and the others. Powerful women who could and did take care of themselves and who shared Miller’s undeniable and evidently irresistible love of life. He doesn’t need that sobriquet anymore, so I think I’m gonna grab it with both hands and make it MINE. I mean, why shouldn’t I?

Through Miller I found Lawrence Durrell, along with dozens of others. As some of you will already know, I was reading Durrell’s “Prospero’s Cell” and “Reflections on a Marine Venus” when I had the “memory seizure” which was the first indication that I had something untowards happening in my brain. I literally had a full-body deja vu of a warm sunny afternoon on Corfu, with the scirocco blowing off north Africa across the Mediterranean carrying the smell of olive trees into my bedroom. I’ve never been to Corfu, except in the writings of Lawrence Durrell — And as of that day of my “memory seizure,” in my own mind. And now the funniest thing has happened — the BBC has released (and PBS is playing) a TV series entitled “The Durrells on Corfu” What, the BBC has decided to document my interior mental life? Cool. I must be real important.

Describing the tiny ancient Corfu city of Cameirus, Durrell gave me the following, which I am honored to share with you, if you have the patience: “When you see the grave-stones from the little necropolis of Cameirus stacked up in our museums (it is inevitable that the treasures of towns like these are hoarded up in Museums) it is the so-often repeated single word — the anonymous “Χαιρε” which attracts you by its simple, obsessive message to the living. It is not the names of the rich or the worthy, not the votive reliefs and the sepulchral epigrams, but this single word, “Be Happy.”

“Be Happy”, serving both as a farewell and admonition, that goes to your heart with the whole impact of the Greek style of mind, the Greek orientation to life and death, so that you re shamed into regarding your life, and realizing with bitterness how little you have fulfilled of the principle behind a thought so simple yet so pregnant, and how even your native vocabulary lacks a word whose brevity and grace could paint upon the darkness of the death the fading colours of such gaiety, love and truth as Χαιρε does upon these modest gravestones. For those who are still interested, Χαιρε translates more completely as a combination of (my words here) “carpe” and “aloha” and “stoke” and whatever the word is for my dog’s attitude when I open my front door and she sees “Woo, hoo, look, another new day!” It is pronounced, as far as I am able to determine, “heh-reh” which sounds really cool when you say it with appropriate enthusiasm and a smile. And I have officially adopted it as my “word to live by.” At least until something better comes along, which is hard to imagine….

Editor’s Note: The photo above is of Scott and his wonderful wife Leslie at Lodge Bread, the site of  Scott’s recent birthday party. Scott is scheduled for more surgery this month, and all good thoughts, prayers, wild haiku, essays, nursery rhymes, legislation and PBS television shows in honor of his health are very much appreciated.